On May 22, Mark Phillips found a Tufted Flycatcher in Upper Ramsey Canyon, Cochise County, Southeast Arizona.  This is the 8th record of this species in the United States. The first record was in Big Bend National Park in November 1991. Since then it has been seen three times in Arizona (Mojave 2005, Cochise 2008, Pinal 2011) and three additional times in Texas (Pecos 1993, Brewster 2010-11, Kleberg 2014).

The typical range of the Tufted Flycatcher is a small strip going from Northcentral Mexico to Bolivia.

A very rare bird like this will generate immediately airline reservations from serious birders all over America. By the very next day, all parking spaces were taken before the Ramsey Canyon Nature Conservancy opened. Those not fortunate enough to get a parking space were turned away.

I was one that got turned away. When I arrived a docent at the Conservancy came out to greet me, apologize, and request that I come back another day.

You might think that after an hour or two there may be a space that has opened up. You'd think wrong.

Yesterday, May 29th, Christine and I tried again, arriving at the Preserve about 7:45 am, and were able to secure a parking space.

The location of the Tufted Flycatcher is a little over two miles up the mountain. The elevation gain is over 1000 feet. And, although the hiking guide says "moderately strenuous" that's if you are 30 years old and in great condition -- which means that for the other 99+% of us it is a chore requiring frequent stops to rest.

For us, it was 2 and 1/2 hours from the Visitor's Center to get to the place when the Tufted Flycatcher is. It was 2 hours back (which included a wrong turn that took us up the wrong side of the canyon and added another 1/2 mile to the ordeal --- journey).

In any case, allowing for at least an hour at the site, it's a five to six hour trip. The Nature Conservancy doesn't open until 8:00 am and closes at 5:00. So, while there may be parking places opening up by 1:00 it would be difficult for anyone arriving after 1:00 pm to get to the site and back.

Now a word about finding this little guy.

The problem is not finding the bird. The reason, the Tufted Flycatcher is nesting. So he/she are always near or on the nest. How do you find the nest? You simply asked the people who are already at the site. (The ones younger and in better shape than you are).

Photographing the bird is a little more challenging. The nest is high up in the tree. The bird itself is the smallest flycatcher in North America. (It is smaller than three of the hummingbird species we have in Southern Arizona -- Magnificent, Blue Throat, and Plain Capped Starthroat). The bird is usually in constant motion, oh, and there are lots of trees, lots of branches, lots of leaves to make focusing difficult.

Nonetheless, I'll show a few photos -- none of which are nearly as good as I had hoped:


Posted by Dennis and Christine Widman at 7:48 AM No comments: Links to this post

The White Eared Hummingbird is a very rare visitor to the United States. And the most reliable place to find one is in Miller Canyon, Huachuca Mountains, at Beatty's Guest Ranch. Tom, Sr. usually posts sighting results on the ABA Birding News site, so if you want to see this beautiful little hummer, check that site daily.

I stopped by the other day when I couldn't get into Ramsey Canyon and saw a male White Eared about every 20 minutes.

Here are a couple of photos:

Posted by Dennis and Christine Widman at 9:38 AM No comments: Links to this post

Huachuca Canyon and the Elegant Trogon

As our busy season has winded down, I had a free morning -- no breakfast. So off I went. I was hoping to find the Flame Colored Tanager and the Tufted Flycatcher that have been reported in Ramsey Canyon. However, when I arrived at Ramsey Canyon I found the parking lot full with the docent greeting me with an apology and suggesting I try again later.

So, back to Huachuca Canyon. Huachuca Canyon was quite birdie. Lots of singing. And a wide variety. I kept hearing one or more Elegant Trogons the entire time I was there. It wasn't until I was just about back to the trailhead that I saw one. And as luck would have it he felt like a photo.

I remain convinced that Huachuca Canyon is the most reliable place in the US to find the Elegant Trogon. A few years ago I would have said Cave Creek Canyon in the Chiricahua Mountains. But since the fire/flood of 2010 it's not been quite as good.

In any rate, here is the best of the day:

Posted by Dennis and Christine Widman at 7:33 AM No comments: Links to this post

As you drive south on Arizona Highway 83 toward Sonoita there has been a Red Tailed Hawk nesting for the past several weeks. Last week when I drove by on my way to Las Cienegas there were a couple of chicks peeking over the nest's edge. Lovely photo:

Posted by Dennis and Christine Widman at 11:34 AM No comments: Links to this post

Had a great time in Huachucha Canyon. The find of the day: a Whiskered Screech Owl. This is a very infrequent visitor to the United States. Really only in the southernmost mountain ranges of Arizona: Santa Ritas and Huachucas (probably Chiricahuas as well).

The photo shoot starts with a "hidden photo": 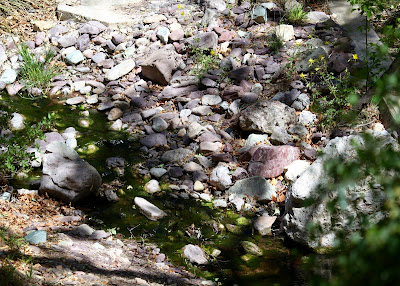 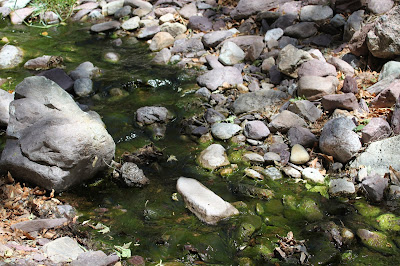 There he is, keeping cool in the creek. 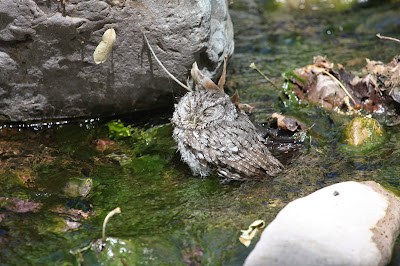 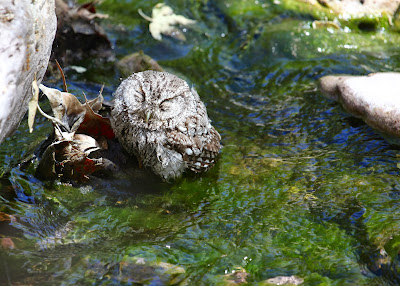 Posted by Dennis and Christine Widman at 12:22 PM No comments: Links to this post

Had a nice day yesterday starting in Huachucha Canyon, then Las Cienegas and Empire Gulch.

Posted by Dennis and Christine Widman at 12:51 PM No comments: Links to this post

Gila Monsters are venomous lizards -- the only venomous lizard in the United States. They typically grow to about 20 - 22 inches long and a little over a pound in weight. Their conservation status is "Near Threatened" and protected by law in Arizona. It is illegal to kill, capture, or disturb Gila Monsters.

They spend most of their life underground, only coming out of their burrows to eat and mate. Mating usually occurs in April and May. The female lays eggs in July or August with a nine month incubation period. So hatchlings emerge in the April - June timeframe. Hatchlings are about 6-7 inches long when they emerge.

And such it was with the little guy that crawled by my office last week:


We know Gila Monsters live on our property although we don't see them every year. But, this little guy obviously was born on our property. (Those are pomegranate flowers on the ground next to the lizard).

Guests had reported seeing an adult Gila Monster the day before over by our Catalina Guest House, which is where we usually see them.

Now a word about the danger of being bitten. Although the venom is as toxic as a coral snake,  the Gila Monster only produces a small amount. Unlike rattlesnakes that have fangs and inject its venom into prey, the Gila Monster's venom is produced by glands in the upper jaw and transferred to the prey by chewing.

There have been no deaths resulting from Gila Monster bites since 1939. Prior to 1939 there are accounts of Gila Monster "attacks" many of which seem greatly exaggerated: In the Tombstone Epitaph  on May 14, 1881 (the year of the Gunfight at the OK Corral) it was reported that a 27 inch "35 pound" Gila Monster was caught by H.C. Hait.

"On May 8, 1890, Empire Ranch owner Walter Vail captured and thought he had killed a Gila monster. He tied it to his saddle and it bit the middle finger of his right hand and wouldn't let go. A ranch hand pried open the lizard's mouth with a pocketknife, cut open his finger to stimulate bleeding, and then tied saddle strings around his finger and wrist. They summoned Dr. John C. Handy of Tucson, who took Vail back to Tucson for treatment, but Vail experienced swollen and bleeding glands in his throat for sometime afterward."

Wild West Magazine published an article three years ago about Hollywood's fascination with Gila Monsters in "Godzilla type" movies.  In one movie there was a poster with a Gila Monster the size of a school bus. (As a reality check, the article included one of my Gila Monster photos).

Gila Monsters are very slow moving. The don't strike like a rattlesnake, i.e. can't jump 4 - 6 feet. You would pretty much have to pick one up and stick your finger in it's mouth, but nonetheless caution is the rule of the day when -- if -- you see one.

Posted by Dennis and Christine Widman at 7:53 AM No comments: Links to this post

My apologies for the lapse in posts.

Apple has made my life a bit more challenging (frustrating) -- still with several unresolved issues.

I've been an Apple user for 25 years. A month ago they upgraded their operating system with a significant change: iPhoto would no longer exist. It was replaced by "Photos" which is part of the operating system now and not a separate application.

However, in so doing Apple eliminated many important functions:

There is no longer the ability to sort photos by Title (or keyword or rating). By default they are all sorted by date -- and in some cases date added as opposed to the date the photo was taken.

Photos no longer has the ability to input photo location information. (I need to be able to identify where a photo was taken: Jasper National Park, Canada; Yellowstone; the Chiricahua Mountains; etc.)

It no longer provides the ability to drag and drop a photo into another application.

In the process of migrating the photos from iPhoto to Photos several thousand titles were lost, many dates didn't migrate accurately (they migrated as date added instead of date taken).

So I have spent the last three weeks trying to get my photo library back into useable condition. Not being able to sort by title is a deal breaker. If Apple doesn't add that functionality back I will have to go to a different photo organizing/editing software -- which, of course, will add more countless hours.

I'll try to get another post off within a couple of days.

Dennis
Posted by Dennis and Christine Widman at 10:32 AM No comments: Links to this post