On this same trip as the Harrier Hawks, I walked away with several other nice photos:

Posted by Dennis and Christine Widman at 9:41 AM No comments: Links to this post

The Harrier Hawk can be found throughout the United States flying low over fields and grasslands. They rest on the ground or fence posts. So they fly and perch much lower than other hawks. While solitary, San Rafael Valley provides such a good habitat that you might see several over the six to eight miles driving the valley.

Here are a few photos from my trip last Tuesday to this wonderful winter birding site: 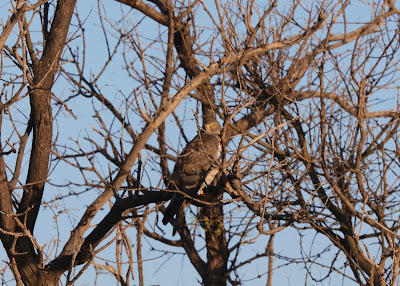 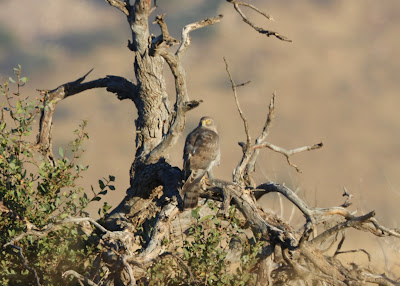 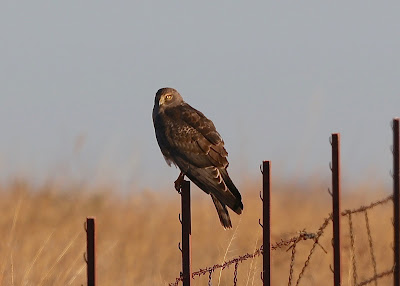 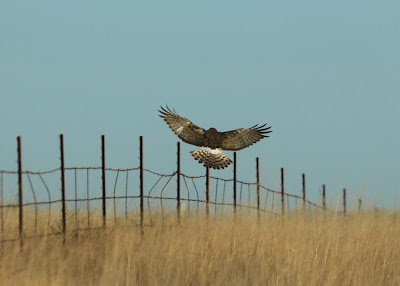 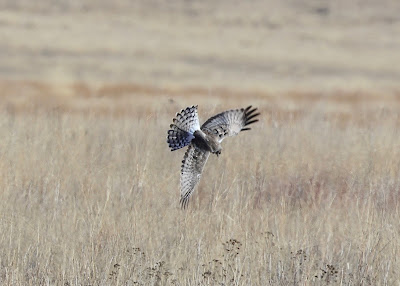 Posted by Dennis and Christine Widman at 9:37 AM No comments: Links to this post

A great day at Sweetwater Wetlands is seeing a Bobcat -- even if you don't see anything else. But seeing and getting great photos of a Black and White Warbler and Common Yellowthroat made it an especially great day.

We have Bobcats that come around our Bed and Breakfast frequently. Frequently meaning six or seven times this year. Guests have seen them other times when we haven't, and certainly Bobcats have come around at night when nobody sees them. So I'm guessing they stroll through several times a month.

Yet I never get tired of seeing a Bobcat and watching them do their thing. And, once again at Sweetwater I was treated to the presence of a Bobcat. They seem to be residents at Sweetwater making it the place with the most potential if you want to see one.

Here are some photos from my November 19th visit: 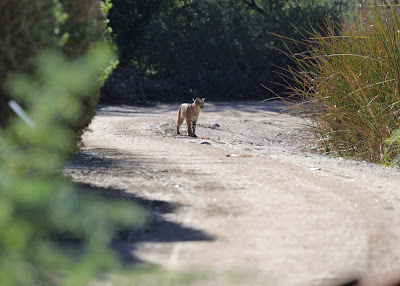 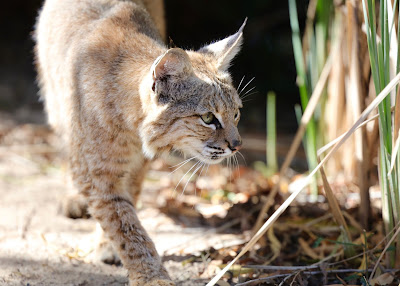 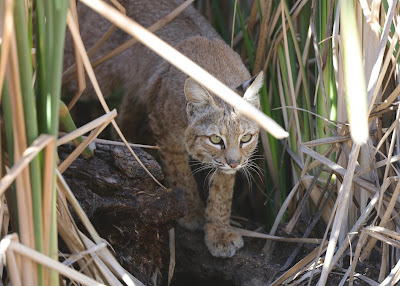 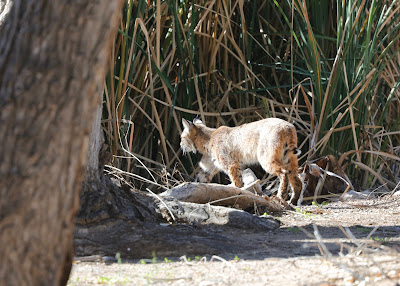 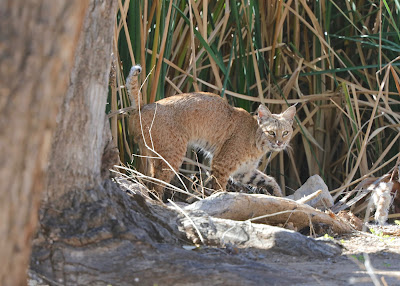 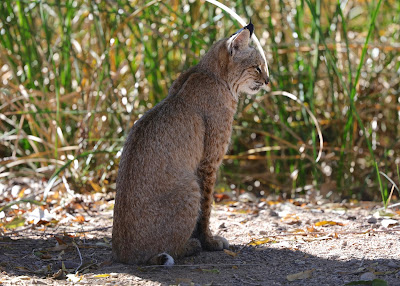 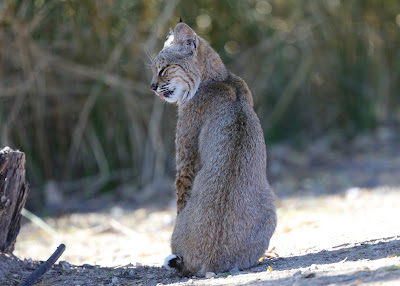 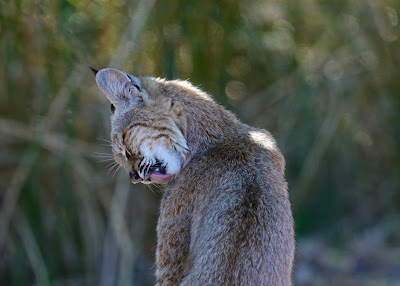 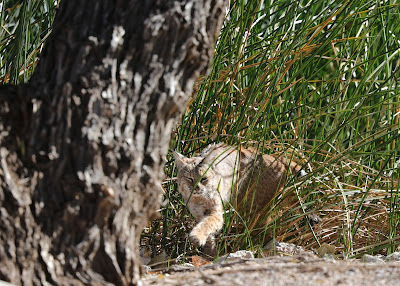 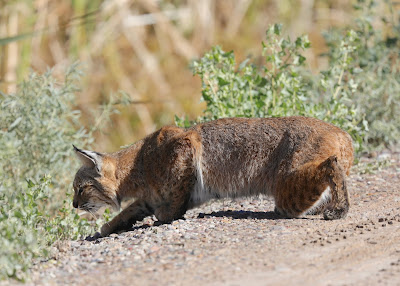 Posted by Dennis and Christine Widman at 6:08 AM No comments: Links to this post

While at Sweetwater Wetlands last Thursday, I did find some other nice photos, including the less often seen/photographed Common Yellowthroat.

Posted by Dennis and Christine Widman at 5:55 AM No comments: Links to this post

Yesterday I headed over to Sweetwater Wetlands to see if I could find the Black and White Warbler that has been reported off and on for the past few weeks.

I have been working on a book about the Warblers of Arizona. The Black and White Warbler is typically an eastern United States warbler. However it occasionally finds its way into Southern Arizona so I want it in my book. I've tried several times before both at Sweetwater and Tanque Verde Wash where it has also been reported, but each time without luck.

It is definitely helpful to know something about a particular bird's behavior before going in search for it. Does it typically forage only it the tops of pine trees, like the Olive Warbler for example, or near the ground in brush like MacGillivray's Warbler. Is it buried in leaves or pine needles like Grace's Warbler? Or is it often found on the trunk or branches like the Black and White or Painted Redstart.

So, knowing where to look isn't just about geography, it is about habitat behavior. And of equal importance are patience and persistence.

Yesterday I found this little guy gleaning bugs off the bark of several tall trees near one of the ponds at Sweetwater. It reminded me at first of the Brown Creeper.

Here are a few of those photos: 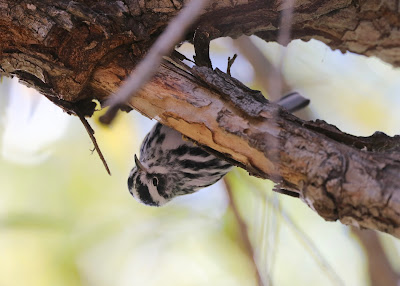 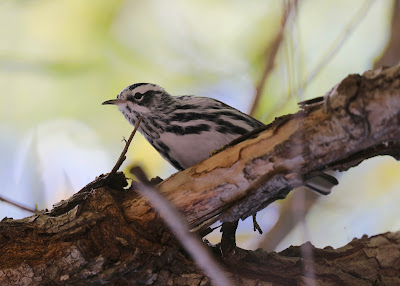 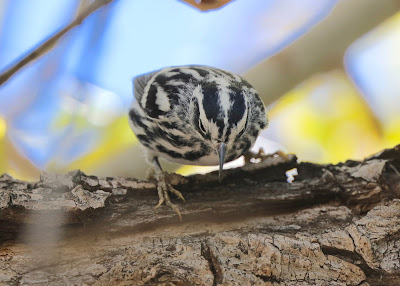 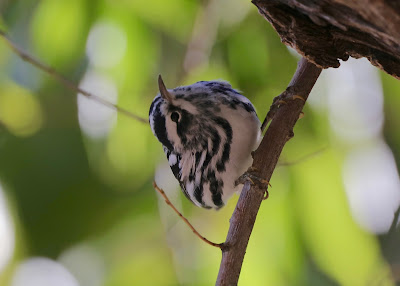 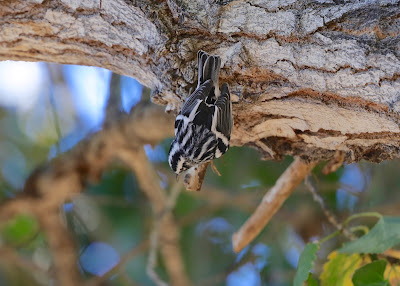 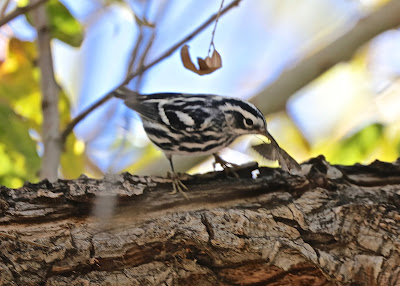 Posted by Dennis and Christine Widman at 5:48 AM No comments: Links to this post

We have Cooper's Hawks seen daily at our B&B. So it is by no means rare.

I should also admit, that there are certain birds I don't stop to photograph anymore: mourning doves, gambel's quail, house sparrows, house finches .....

Yet, as Christine and I were working our way back up Tanque Verde Wash we saw something in the water about 300 feet ahead of us. As I looked through my camera (400mm lens) I could see it was a Cooper's Hawk. The setting made this a unique photo. So I took one (from 300 feet) then started walking very slowly, calmly, toward the hawk. Every 30 feet or so I took another photo thinking it might be the last before the bird flew off. But, no. He let me get about 25 feet away where I got some nice photos. Still there I motioned for Christine to follow to get a better view. However, at some point the Cooper's Hawk flew up to an overhanging branch about ten feet from where it was drinking.

Here are a couple of those photos:


Posted by Dennis and Christine Widman at 3:55 AM No comments: Links to this post

Growing up in Washington D.C. my idea of the desert was white sands and no vegetation as far as you could see. But the Sonoran Desert is not that at all. There is very little sand. It is mostly rock-hard dirt with a wide variety of cactus, mesquites, palo verdes, and creosote. Yet, tucked in the middle of the Sonoran Desert is Tanque Verde Wash.

TVW is dry 80% or more of the year. But that 20% creates a year round riparian zone with large cottonwoods, cattails, bamboo ......  And many of the birds you can find there you would not find even 100 yards from the wash. And the rarities include Northern Parula, Magnolia Warbler, Black and White Warbler, Lawrence's Goldfinch, Red Shouldered Hawk, Gray Hawk ....

Living just minutes from the wash, I have been out several times of late. The wash isn't filled with water but there is a steady stream flowing side to side which creates 20-30 stream crossing within the two miles I hike/bird. It is a sandy bottom so you must actually walk through the water as you go. And what isn't water is also sandy so it's a good workout even though flat.

Yesterday, after breakfast, Christine and I set out to see if we could find the Lawrence's Goldfinch and the Black and White Warbler that have been reported there of late. And, as luck would have it, both a male and female Lawrence's Goldfinch were cooperative. We didn't find the rare Black and White Warbler, though got momentarily excited about a Black Throated Gray until I realized that's what it was. (It's still a pretty bird and I love photographing it).

Here are those photos:


Posted by Dennis and Christine Widman at 3:34 AM No comments: Links to this post

In addition to the raptors, there were other nice photos ops including a Black Bellied Plover. It is one of the most reliable places to find the Eurasian Collard Dove (if that's something you are interested in). Here are a few photos from my trip last week:

Posted by Dennis and Christine Widman at 10:26 AM No comments: Links to this post