I have wanted to photograph a Yellow Billed Cuckoo for all 13 years we've live here in Southern Arizona.

The YBC is listed as endangered in the west with populations only of fraction of what they were a hundred years ago. The US Fish and Wildlife Service has designated areas of Southern Arizona as critical habitat for them.

Over the past 13 years I've gone out looking for them many times; often after reading about a sighting. They are migratory birds that enter the US during our summer, then migrate as far south as Argentina (to enjoy their summer).

Yesterday, I went looking again. I arrived at Empire Gulch in the Las Cienegas National Conservation Area just after dawn. However, the gulch had been severely flooded and there was still mud up to my ankles. It was impossible to get into the gulch. Hugely disappointed, I decided to check out the area above the gulch, behind the old bunkhouses. Although the "Nature Trail" had all but disappeared under thick new growth I "bushwacked" my way though and got to some extremely large cottonwood trees. The area was quite birdie: yellow breasted chat, warbling vireo, black headed grosbeak, cardinals, hepatic and western tanagers to name a few I spotted and/or photographed.

I was standing (still) under one of those cottonwoods photographing a female Hepatic Tanager when to my surprise a Yellow Billed Cuckoo flew into a small tree directly in front of me. Although he was partially covered I was very close and was able to get some nice photos. I wanted to get a full frontal photo but was afraid to move for fear of causing the YBC to fly away. So after a few photos, I just stood and admired him. 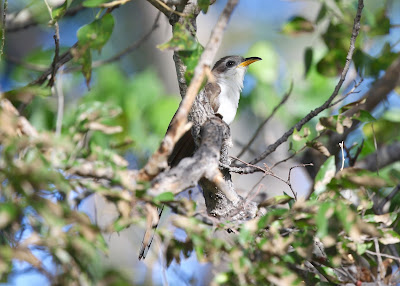 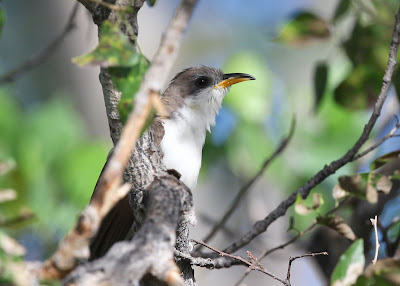 Posted by Dennis and Christine Widman at 6:25 AM No comments: Links to this post

Today's photo is not of a particularly rare bird. Although only found in the southwest, the Verdin is fairly common. We see them everyday here at our Bed and Breakfast. So I have lots of photos. But sometimes whether it is the composition or the detail a photo is memorable. Sometimes both. Yesterday I went over to Sweetwater Wetlands and came home with one of those photos. Here it is, the Verdin:

Posted by Dennis and Christine Widman at 7:55 AM No comments: Links to this post

Since I had success (and fun) a couple weeks ago going into the Tumacacori Mountains, I thought I'd do it again.

I have posted several times over the past month about my trips up Mount Lemmon in Tucson, Arizona looking for Warblers in general and a Male Olive Warbler in particular. I'm guessing 30-40 hours in total.

Olive Warblers are only found in parts of Southeast Arizona, Southwest New Mexico, and the extreme Southwestern part of Texas. And only at or above 7000 feet. On top of that they like the tops of very tall pine trees. That means they are usually 60-80 feet off the ground.

Complicating matters more, female Hermit Warblers are often mistaken for female Olive Warblers. As a general rule, I assume Hermit Warbler unless it is a male. The male is unmistakeable with its rich butterscotch head, face and throat. Then the dark mask over the eyes is convincing.

But back to my story. This last trip on Thursday I came home not realizing that I had actually found and photographed a male Olive. Now you might ask how that is possible, but again a five inch bird  60-80 feet off the ground and buried in pine needles. I remember the place, it was above the parking lot for Mount Bigelow Trail -- not on the trail itself. This is the area just above Incinerator Ridge. The bird was a mere silhouette to me at the time, so I didn't know what it was.

It wasn't until I got home and sorted through 500 photos that I came across the following Olive Warbler photos; 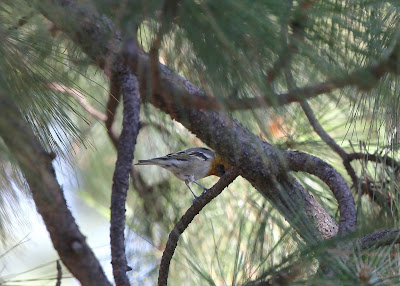 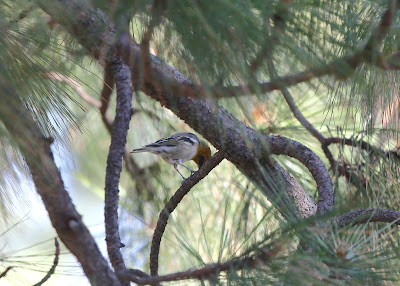 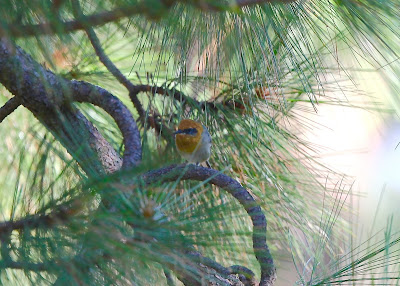 Success at last. And an exciting day.

Posted by Dennis and Christine Widman at 7:36 AM No comments: Links to this post

Christine and I got away on Sunday for a quick trip up to Flagstaff to see our Grandson Noah in a production of Les Miserables.

Since we got there a bit ahead of time I took a short hike into Buffalo Park. There I found 6 Mule Deer Bucks and got to spend several minutes with them photographing. Here are a few of the photos:

Posted by Dennis and Christine Widman at 7:49 PM No comments: Links to this post

Back to Birding Mount Lemmon

I continue to bird Mount Lemmon just outside Tucson in Arizona. The first of the birding sites is just 8 miles from us. And from there up to the top (30 miles from us) is outstanding birding.

I've been on a "mission" to find a photograph a male Olive Warbler. I'm also trying to get a better photo of a Grace's Warbler.

As I've talked with other birders, I think many of the "reported" Olive sightings have actually been Hermit Warblers -- which are plentiful. With almost every trip I find a Grace's but they are extremely difficult to photograph. They are almost exclusively in the top third of the tall pine trees above 7000 feet. That being the case it is difficult to get that full side view in full detail.

Yesterday, at dawn, I started at the top and worked my way down. The thought is that the top gets sun first which attracts the Warblers. Six hours later, I came home after having taken 1350 photos. (Thank goodness for digital). And although I missed on the male Olive again, I came back with some "bests".

Here are a few of the photos:


Posted by Dennis and Christine Widman at 12:21 PM No comments: Links to this post

A forrest road from Exit 29 on Interstate 19 takes you into the Tumacacori Mountains. This is a very primitive area: no facilities and no signs of human existence other than the "road." This is a 4x4 high clearance road only. I should add with an experienced off road driver as well, i.e. it is not for beginners. The road is mostly rocky. (I have a Jeep Rubicon with very good off-road tires).There are times when going up a hill you will not be able to see the road in front of you, and at the top not be able to see the road below. There will be times you will have to get out of your vehicle to check to see 1) which way the road goes, or 2) if the road is passable. (It could be washed out, full of water, or with a downed tree or boulder in the way.

As such, human traffic is significantly limited. And, as such has a significant amount of wildlife is present. On my trip in I saw black tailed jackrabbits, mountain cottontails, and deer. Javelina are also present though I didn't see any. There were thousands (or more) Butterflies. And, there is a report (unconfirmed) of at least one Black Jaguar living in the area.

I went into this area looking for a Yellow Billed Cuckoo -- which I found but was unable to photograph. Also seen but not photographed was a Golden Eagle I startled. I did photograph a nesting Warbling Vireo, numerous male and female Northern Cardinals, Black Throated Sparrows, Rufous Crowned Sparrows, Lark Sparrows, Western Kingbirds, Brown Headed Cowbirds, and Varied Buntings.


Posted by Dennis and Christine Widman at 6:07 AM No comments: Links to this post

Many warblers are hard to find, let alone photograph. Some like the Grace's and Olive's stay in the tree tops some 40 to 80 feet off the ground. They can be completely hidden by leaves or pine needles. Your only hope is to see them fly from tree to tree.

In other cases, such as the Painted Redstart, Lucy's, Nashville, Wilson's, they like brush and can even be seen on the ground at times.

As for identifying them, sometimes that too can be challenging. Case in point, the Olive Warbler. For those people with a fine ear (and memory) hearing becomes the best way to distinguish  a female Hermit Warbler from a female Olive Warbler. That's if the birds are vocal. But trying to identify a female Olive by sight in real time? Not very likely. Even with good photographs of both an Olive and a Hermit it is difficult. I have on several occasions come home thinking I have an Olive photograph when after careful study concluded it was a Hermit.

Nonetheless, for a birder or photographer spending a few hours in the wilderness of Mount Lemmon can be exciting when a mix flock of Warblers rolls through a canyon. We are used to spending an hour and not seeing anything -- then all of a sudden there are so many birds you don't know what to try to photograph first.

As I mentioned in an earlier post, I've been trying to concentrate on Warblers of Mount Lemmon. Here's a summary of what I've photographed in the past three weeks:

Posted by Dennis and Christine Widman at 7:32 AM No comments: Links to this post