The San Pedro River offers wonderful year round birding. Springtime brings migrants - the orioles and tanagers are always photographable. Yet it offers a wide variety of other birds as well:


Posted by Dennis and Christine Widman at 5:31 AM No comments:


Patagonia Lake is a good birding spot for both waterbirds and riparian birds since a creek runs both into and out of the lake. Here are a few of the day's photos:

Posted by Dennis and Christine Widman at 5:52 AM No comments:

There are 56 species of Warblers in the United States. 50 of those have been reported in Southern Arizona, although 15 of the 50 have less then 12 confirmed historical reports.

Since Mount Lemmon is right outside our door, I like to go up March to October when I don't have enough time to hit the southern mountain ranges. I suspect that in the 16 years we've lived in Tucson, I been up Mount Lemmon at least 100 times.

Yet, I still love going up looking for warblers. Three weeks ago, a Red Warbler was found and photographed in Rose Canyon at about 7000 feet. It is not one of the 56 species, and in fact it was the first ever Red Warbler seen and reported in the United States. I went up the next day (along with about 300 other people) looking for it, but without luck. (None of the 300+ so it that day or since).

Some days are great -- 10 warbler species. But there are days of not finding any -- or just one or two.

The Red Faced Warbler is a beautiful warbler that is primarily a Southern Arizona only warbler. (Occasionally, there are reports from Southwest New Mexico).

Over the years I have taken many photographs of Red Faced Warblers. But I must say that this past week I was able to get three of my favorites.  Here they are: 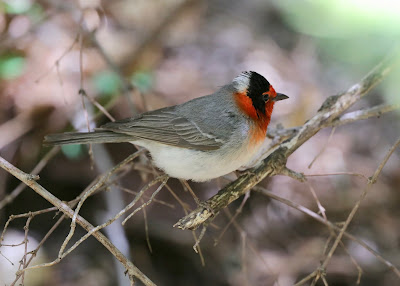 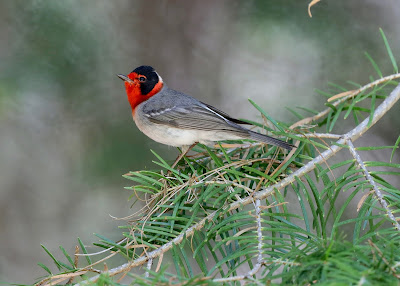 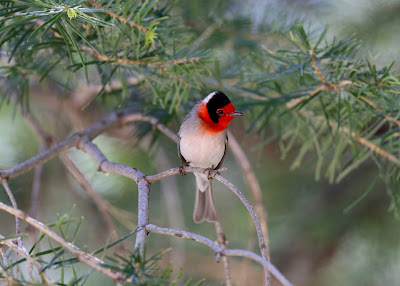 Posted by Dennis and Christine Widman at 7:12 PM No comments:

Twice this past week I birded the Upper Sabino Canyon Trail which is at the end of Turkey Run Road in Summerhaven. It's a bit different than Incinerator Ridge or Rose Canyon which are my favorite birding spots on Mount Lemmon. Upper Sabino Canyon Trail is almost another 1000 feet in elevation and there you find Aspens and Douglas Firs. The Douglas Firs are magnificent. You get the feeling of standing inside Mother Nature's Cathedral. They appear to reach the heavens they are so tall.

Both days the predominant bird was the Red Faced Warbler. They seemed to be everywhere.They are easier to find than many of the warblers since they prefer foraging in trees and brush less than 15 feet. And, they often don't seem to mind people around.

Here are a few photos from those two trips:


Posted by Dennis and Christine Widman at 7:04 AM No comments:

One of my favorite places in Southern Arizona is Las Cienegas -- the home of Empire Ranch -- and about 50 western movies of old.

It's a great place for sparrows, kingbirds, and meadowlarks. They're everywhere. There is the Cottonwood Pond which can attract some rarities (Black Bellied Whistling Duck and Rosette Spoonbill to name a couple).  It also has a wonderful riparian wetland called Empire Gulch. And it's not just birds. Over the years I've seen Pronghorn, Deer, Javelina, Coyote, Rattlesnakes, Jackrabbits, and Black Tailed Prairie Dogs.

Here are some photos from my trip earlier this week:


Posted by Dennis and Christine Widman at 11:50 AM No comments:

We've had 10 different snakes over the years of running The Azure Gate B&B. We know the Western Diamondback Rattlesnake lives on our property. And we sometimes see the little ones -- about the size of a pencil. The one we see the most of, however, is the Desert Kingsnake. This is a very beautiful snake as you can see from the photos. I found it cooling off in one of our bird baths by the office: 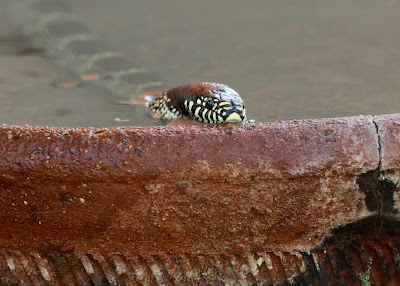 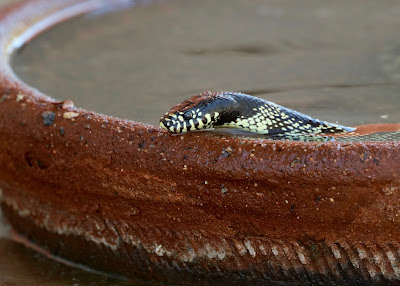 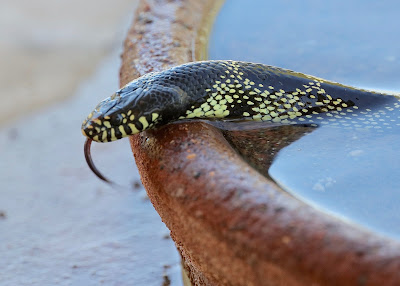 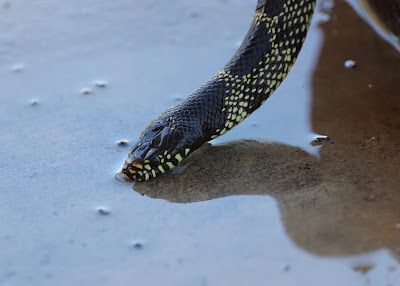 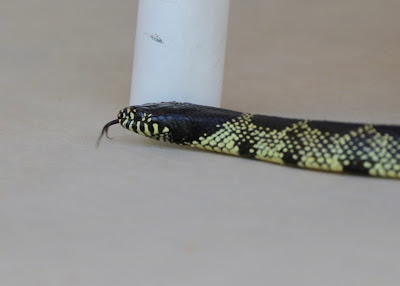 Posted by Dennis and Christine Widman at 11:40 AM No comments:

It's always fun to stop at Mary Jo's Ash Canyon B&B whenever I am in the Huachucas. The other day was no different. Here are a few of those photos from Ash Canyon:

Posted by Dennis and Christine Widman at 11:35 AM No comments:

"Northern Goshawk is the largest and scarcest of the North American accipiters, making it sought after by birders. They nest in coniferous forest across northern North America. Although they are typically not seen south of Pennsylvania during summer, they nest throughout the mountainous areas of the western states and into Mexico. Even though widespread they are never dense. Goshawk is notoriously aggressive toward intruders near their nest, and defend them relentlessly and loudly! Biologists conducting nest research are wary and wear protective gear or face bloody consequences.
Unlike the other accipiters, Goshawk eats mammals (including squirrels and hares) equally as much as birds (i.e. flickers, jays, Grouse, Ptarmigan). They are seldom encountered except at a few hawk migration sites... They are vocal, emitting a loud, screaming "Kak-Kak-Kak...", slower, louder, and deeper than Cooper's Hawk. Females approach the size and bulk of Red-tailed Hawk, but males not much larger than female Cooper's Hawk."  Information taken from Hawk Watch International.

There has been a pair of Northern Goshawks that have nested in Miller Canyon (Huachuca Mountains) for several years. And for several years I have tried to find them without luck. But persistence can pay off. And it did this year. The female never left her nest, but the male would perch from one tree to another. Here are some photos: 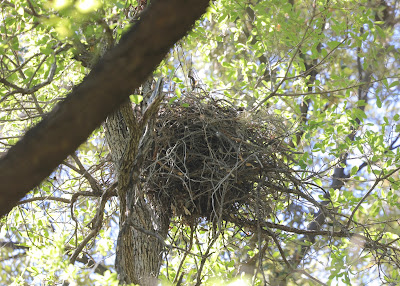 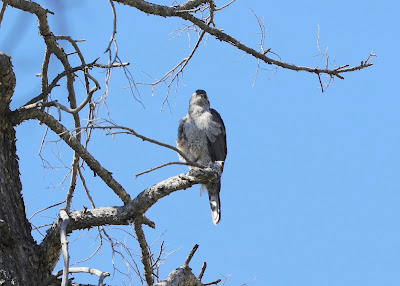 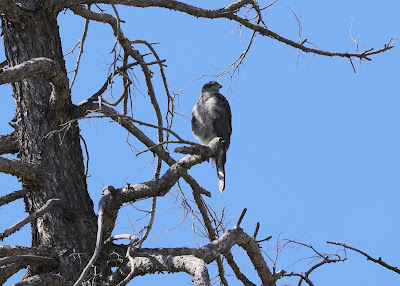 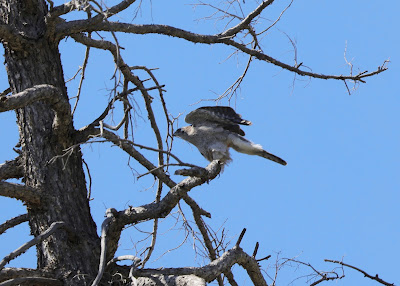 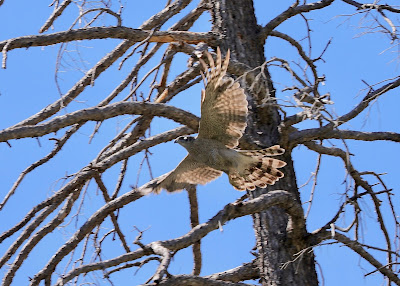 Posted by Dennis and Christine Widman at 8:58 AM No comments: