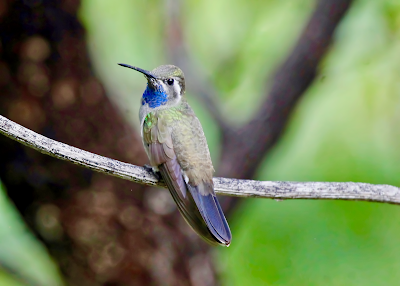 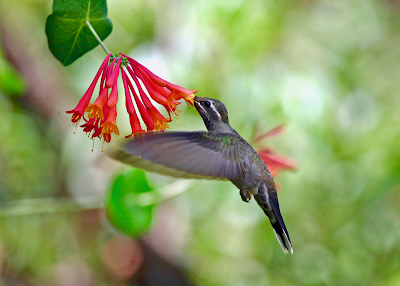 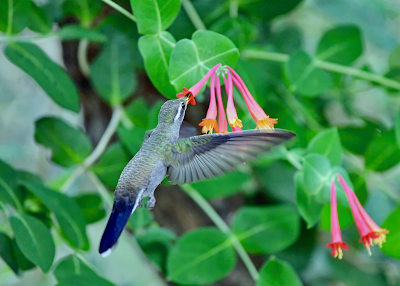 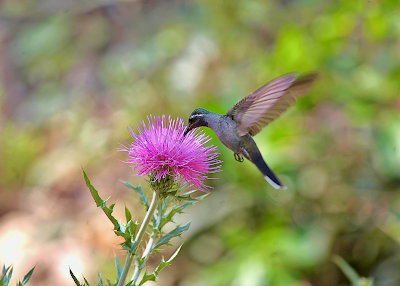 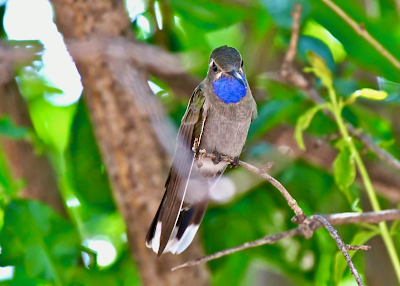 Size: The Blue-throated Hummingbird is the largest hummer at about 5.25 inches with a long and straight black bill. It has the largest wingspan of any hummingbird (8 inches). When many hummers are present, the Blue Throat (and the Magnificent) will stand out sharply because of their size.

Identifying Characteristics: The sexes are very similar in every respect except that the male has the "blue throat." Both have thin white stripes above and below the eye. Both have uniformly dark gray bodies. It's tail feathers are an iridescent blue which you can see from the photos above.

Habitat: Shady mountain woodlands and canyons where water is present. So it may migrate into normally dryer areas when there is abundant rainfall. Likes sycamores and maples though where there is water can be found among conifers as well.

Seasons: The Blue-throated is most numerous in Arizona from late April through September. However, they can sometimes be found at the Portal and Ramsey Canyon feeders during winter months.

Where to Find: The Blue -throated is much less common than the Magnificent. A reliable spot is Beatty's Orchard in Miller Canyon, in the Huachuca Mountains (though it is not always there on a daily basis even in the summer). It will be found in the upper feeder site across the canyon's creek. It is a year round resident at the Cave Creek Ranch feeders (in Portal), so it is a sure bet there. Newly bloomed thistles are a great "feeding ground" for many hummingbirds. So a great place to look as well.

Comments: Usually, there are incredible aerial displays of these large hummers. They have the slowest wingbeat of any North American hummingbird, but because of their enormouos wingspan  move very quickly -- and right in your face.  They are not constantly at the feeders, though. You may have to wait 15 - 20 minutes or more, (if they are in the area) so be patient.
Posted by Dennis and Christine Widman at 11:00 AM No comments: Links to this post 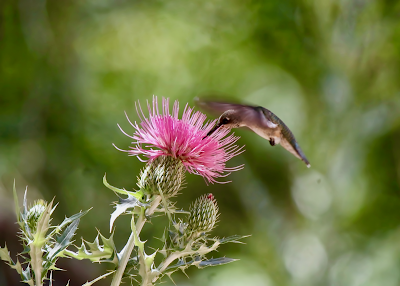 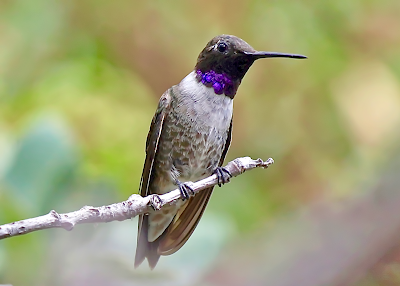 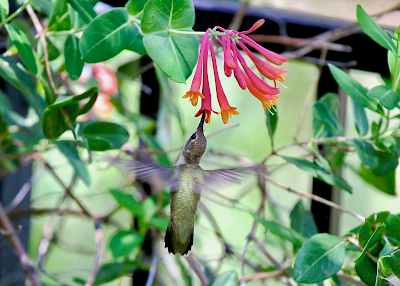 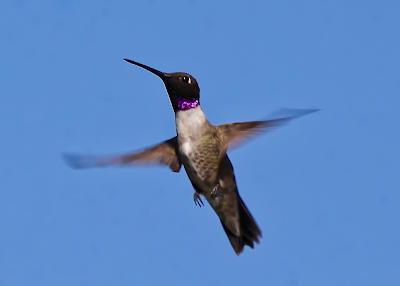 Size: The Black-chinned Hummingbird is a smaller hummer at 3.75 inches but with a slightly longer straight bill.

Identifying Characteristics: The male has a black chin with a violet purple throat. Like most hummers the throat changes color with sunlight. Typically the chin and throat are indistinguishable and appear black. However, when turned, with the proper sunlight you can see the violet purple of the throat as in the  photos on this page. The crown is dark green (appearing black sometimes) so it is easily distinguished from the Anna's which is red. The gorget is not long like the Costa's or Calliope. The tail is white tipped with no orange. The male has no white on its tail.

Range: Western United States and Mexico.Seasons: The Black-chinned Hummingbird spends its summers in the westernmost ten states (including Arizona) and spends its winters in Mexico. It is the most common (abundant) hummingbird in the Madrean Sky Islands of Arizona.

Where to Find: Miller Canyon, Ramsey Canyon, Ash Canyon, and Madera Canyon. They will be the most common hummer you will see in any of those places. Finding them is a sure bet. They aren't frequently found here at The Azure Gate because they prefer a little higher elevation.

Comments: Black-chins are primarily nectar feeders using a long extendable tongue to feed. This makes them a good pollinator.  They will also eat small insects on occasion.

But, because of their small size they are vulnerable to insect eating birds.
Posted by Dennis and Christine Widman at 10:47 AM No comments: Links to this post

Size: The Berylline is a mid-sized hummingbird of about 4 inches, with a medium length straight black bill.

Identifying Characteristics: Both male and female adults are predominantly metallic olive green with a rusty gray lower belly. The primary wings and tail are rufous in color and slightly forked. The underwing is also rufous. The male throat is  a slightly darker turquoise green than the female. The top photo is a female. The bottom photo is a male.  These colorings make the Berylline fairly easy to identify.

Habitat: Oak woods and canyons not far from water.

Range:   Forests in Mexico; rare to the United States.

Seasons:     Year round resident in Sierra Madre, Mexico; occasional sightings in Southern Arizona between April and the end of September.

Where to Find:    This is a hard one to find. During the summer months they could be in Miller Canyon, Madera Canyon, and Cave Creek Canyon. You will want to check the Audubon's Rare Bird Alert and ABA's Birding News to help with the location. (In 2012 there were no reported sightings in the US).

Comments:     They don't come to the United States in large numbers and don't hang around the feeders for long. They come in for 10 to 15 seconds, drink, and then fly off into the trees far away from the feeders. Patience (and luck) are required to spot and photograph them. Those that come to Arizona often come to breed and thus stay close to their nests which are typically 17-35 feet above ground.  Try Miller Canyon first and then the upper feeding areas in Madera Canyon (Kubo Cabins or Chuparosa Inn).
Posted by Dennis and Christine Widman at 10:33 AM No comments: Links to this post


The Anna's is the most abundant hummingbird here at The Azure Gate Bed and Breakfast. They can be found every day of the year -- including the very rare "snow days" as seen in one of the photos below. 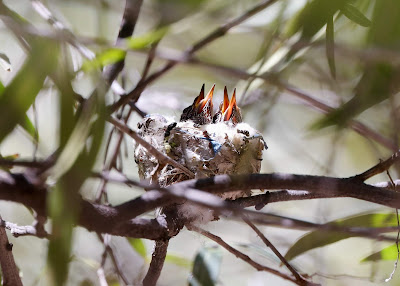 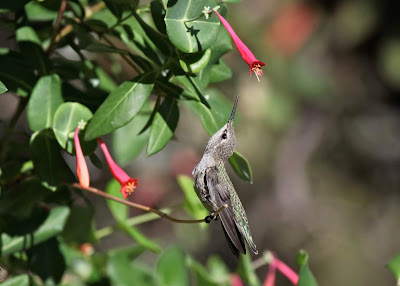 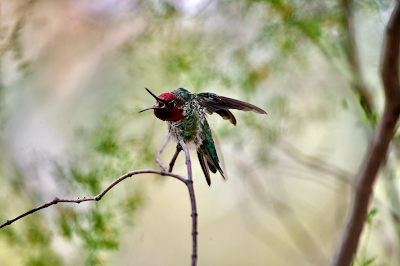 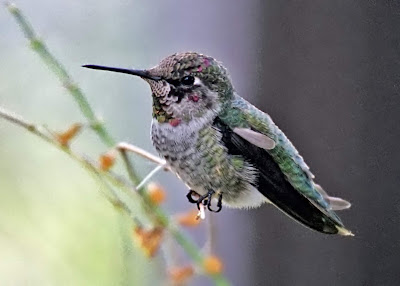 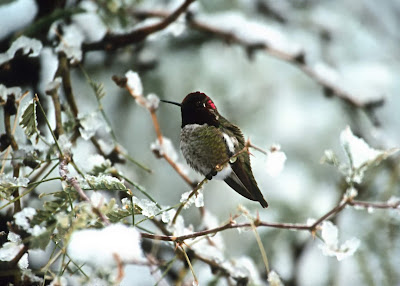 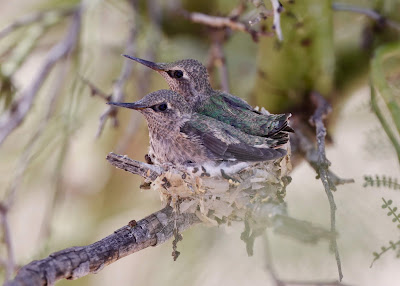 Size: Anna's is a mid-sized hummingbird of about 4 inches, a little more "rounded" (i.e. heavier),  a medium sized straight black bill, and a medium to long tail.

Distinguishing Characteristics: The most distinguishing characteristic of the male is a red crown and  red throat as seen in the first photo. The gorget is somewhat extended at the corners though not nearly as much as the Costa's. The female has a red central patch which can be seen in one of the photos above. (Its central patch does not always appear red).

Habitat:  Wooded canyons, coastal scrub, scrub desert, urban areas, and gardens from sea level to 5,700 feet. Anna's feeds on the nectar of a wide variety of flowers and insects.

Range: Anna's is found along the Pacific Coast as far north as Washington and across to Southern Arizona.

Seasons: It is typically a year round resident in its range. During summer months some will move to higher elevations and some will migrate to Southern Arizona and Northern Mexico in the winter.

Nests (Arizona): October - June. Nests are often "eye level" to 10 feet in dense mesquite or palo verde trees and beautifully woven into small "cups".  The male usually takes no interest in the nest.

Where to Find: Anna's is present year round at The Azure Gate Bed and Breakfast and easy to find. Anna's is found at most of the premier Hummingbird Sites as well.

Posted by Dennis and Christine Widman at 10:26 AM No comments: Links to this post 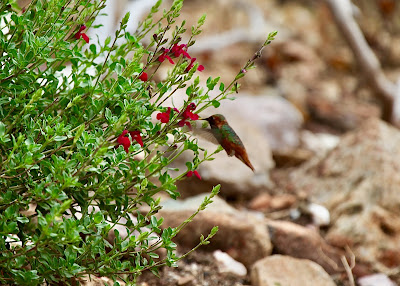 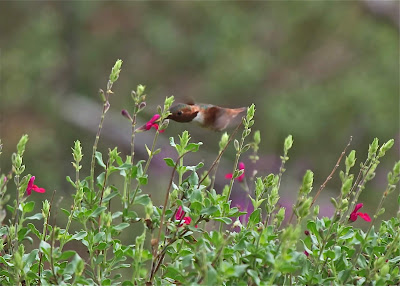 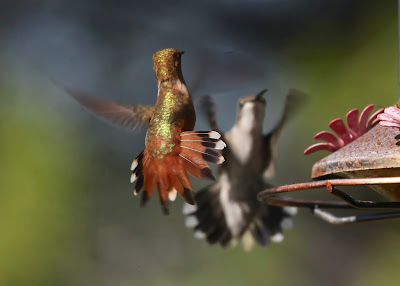 Distinguishing Characteristics: The Allen's male can be distinguished from the Rufous by its green back and crown. The female Allen's and Rufous cannot be distinguished in the field. The R5 tail feather (rectrix) is slightly narrower in the Allen's (on both male and female). You can see this in the last photo above.

Habitat:  Moist coast and riparian forest and woodland, typically only to 1,000 feet (Arizona the obvious exception).

Range: Allen's has a very small breeding range which was restricted from the Northern California  to Southern Oregon coast. It's range has been expanding into Southern California over the past few years.  It is occasionally found inland but not when breeding.  Allen's sometimes finds its way into the Madrean Sky Island foothills of Southern Arizona. It's winter range is also quite small being restricted to forest edges in Southern Mexico.

Seasons: In Arizona, it's found primarily in July, August, and September.  It's thought that these are migratory birds headed to their wintering location. Allen's winters in a relatively small area in south-central Mexico.

Where to Find: Allen's is rare to Arizona. The first two photos are from Ash Canyon (in the foothills of the Huachuca Mountains). Ash Canyon B&B has closed but try Ramsey Canyon. The last photo was from WOW Arizona a privately owned residence near the town of Catalina on the northside of the Catalina Mountains (again in the foothills). Allen's have also been reported in Madera Canyon and Patagonia. Keep an eye on the Audubon Society's Rare Bird Alert and the ABA's Birding News for Arizona and New Mexico.

Comments: Allen's is typically less aggressive than the Rufous. When found in Arizona there are often Rufous around as well. This makes identifying them a little more difficult -- especially the females.
Posted by Dennis and Christine Widman at 10:08 AM No comments: Links to this post

With only about 300 nesting pairs in the United States, the Zone-tailed Hawk is a rare find -- except in March during the Tubac Hawk Watch. They are often found among Turkey Vultures. One possible reason is that small mammals may not recognize them among the vultures (who are harmless). And then it is too late.

Their US range is essentially Arizona and Southwest Texas, but has been shifting north over the past two decades. The worldwide population is thought to be less than two million mostly in Mexico and Central America.

They are typically found in in desert or mountain canyons as well as rivers with cottonwood trees. The Santa Cruz river is a good spot to look.

Posted by Dennis and Christine Widman at 11:07 AM No comments: Links to this post

Swainson's Hawk summers in much of the Western United States, migrating to South America during the winter months.

Unlike the Cooper's and Sharp-shinned the Swainson's preference is flying over grasslands, farmlands, and ranches looking for small mammals and reptiles. It is skilled at capturing insects in flight. So as it begins to head south for the winter it follows nomadic dragonflies.  Yet it will also feed on grasshoppers and caterpillars. 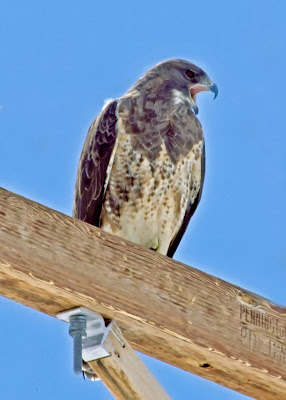 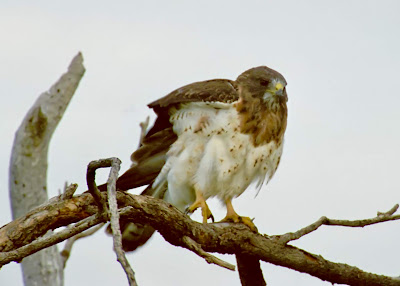 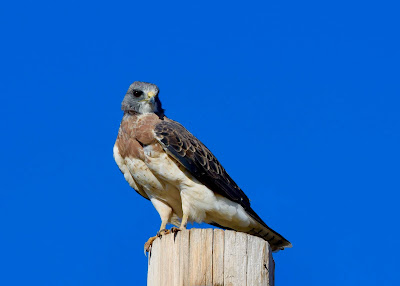 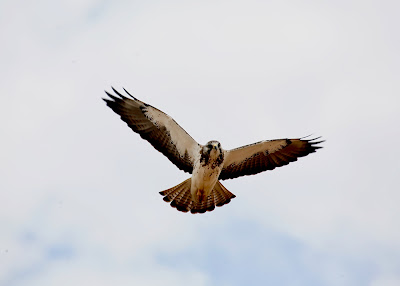 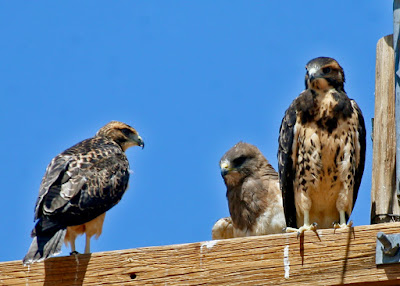 Posted by Dennis and Christine Widman at 4:34 AM No comments: Links to this post