The Gray Hawk is very rare to the United States. Estimates are about 100 nesting pairs. They migrate into the US along the Santa Cruz River from Nogales to Tumacacori and Tubac. From there they either stay and nest along the river, or go 20 miles east across the Santa Rita Mountains to Patagonia Creek. They will also go another 20 miles further east across the Huachuca Mountains to the San Pedro River. These are the most likely spots to find this rare hawk.

Unlike the Ferruginous Hawk, the Gray Hawk primarily eats lizards found on tree branches that it spots either from a perch or flying along the river/creek.

The Gray Hawk migration can be seen each March usually between the 10th and the 20th. Birders gather at Morriss County Park in Tubac as the hawks arrive daily (usually between 8:30 and 2:00). 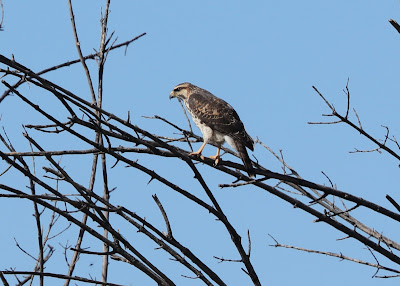 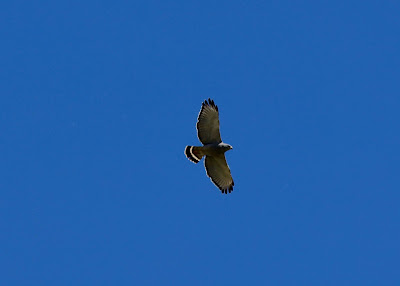 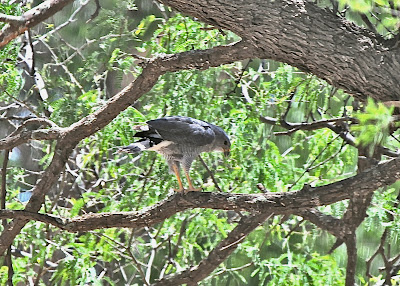 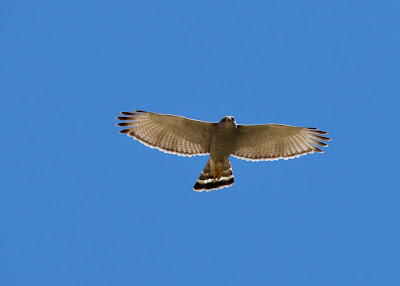 Posted by Dennis and Christine Widman at 2:40 PM No comments: Links to this post

The Ferruginous Hawk is a rare hawk found mainly in the Southwest, though some summer Colorado, Utah, Wyoming and Montana.

Rests on fence posts, telephone polls, and occasionally on the ground. It hunts from the air mostly for small animals such as rabbits, squirrels, rodents, snakes, and birds.

It is the largest of the hawks with a wingspan of 56 inches.

Unlike many of the other hawks, it doesn't seem to mind humans getting a close look or taking a photo. This first photo, at Cibola National Wildlife Refuge, was taken at about 10 feet away: 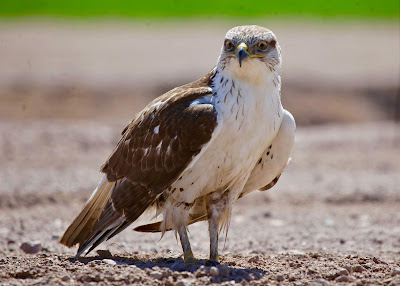 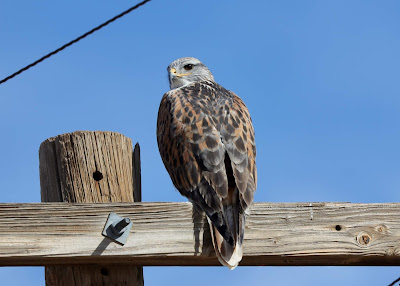 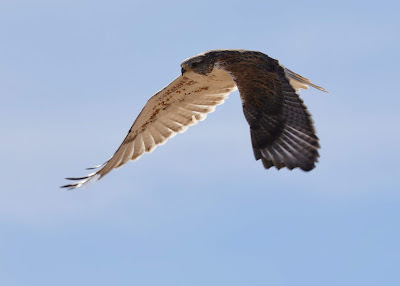 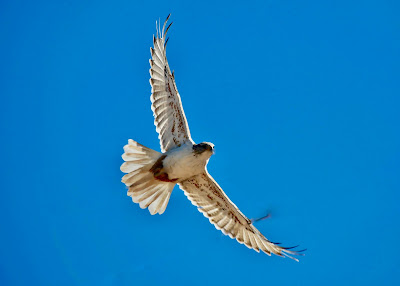 Posted by Dennis and Christine Widman at 2:16 PM No comments: Links to this post


The Cooper's Hawk is the most common hawk here at The Azure Gate Bed and Breakfast. We see one nearly every day -- often eating a dove or quail they just caught. In the warmer months we serve breakfast outside by the pool. And often a Cooper's Hawk will fly in and sit on (or in) one of our birds baths for 10-15 minutes giving guests a nice look.

Here is a Juvenile Cooper's Hawk sitting in one of our bird baths: 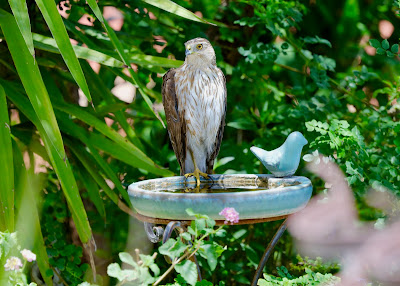 And here is an adult Cooper's Hawk sitting in another one of our bird baths: 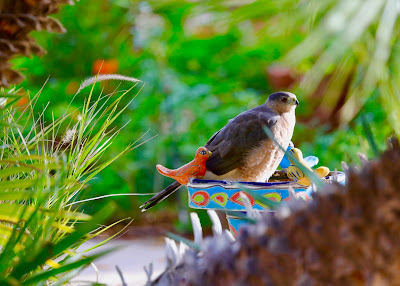 And one eating a dove he just caught outside our office: 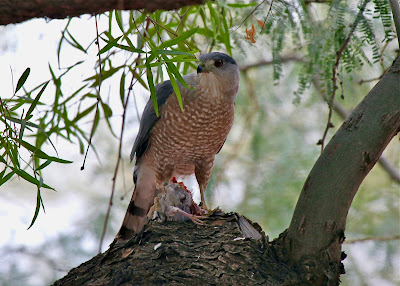 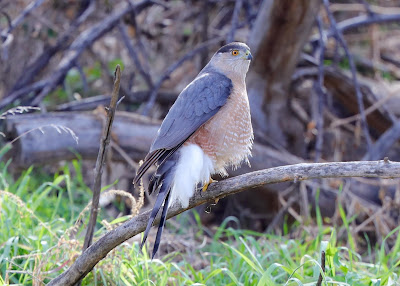 And a pair of Juvenile Cooper's Hawks taken at McDonald Park about a mile from us: 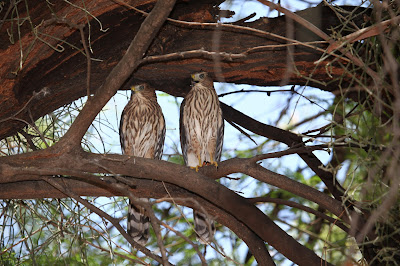 Posted by Dennis and Christine Widman at 4:36 AM No comments: Links to this post


Going alphabetically on the Hawks we start with two rarer ones to Southern Arizona, the Broad-winged Hawk and the Black Hawk.

First, the Broad-winged Hawk. An uncommon hawk in the Eastern United States.   It summers in the US and winters in South America. Like the Black Hawk, they gather together for mass entry and exit as they move along the migration routes.  It is rare to the Western United States. This one was photographed in April above Tanqque Verde Wash in Northeast Tucson.

The Common Black Hawk is rarer to the United States in general. (i.e. not common at all). Estimates are about 250 nesting pairs in the US nearly all in Arizona. It arrives in Mass along the Santa Cruz River during March each year. The Tubac Hawk watch has become an annual event where birders come for a look. Birding organizations collect data on the migration.

The Black Hawk is always found near tree-lined water as its primarily diet is fish, frogs, and crayfish. It will also take lizards, small birds, and snakes.

Posted by Dennis and Christine Widman at 4:17 AM No comments: Links to this post

As with Terns, Gulls don't dominate Southern Arizona waters. But again sometimes they will pop up:

Posted by Dennis and Christine Widman at 12:39 PM No comments: Links to this post


Southern Arizona is not know for it's terns, though some do occasional find their way. The Common, Elegant, and Forster's Tern photos were all from Southern Arizona though.

Posted by Dennis and Christine Widman at 12:31 PM No comments: Links to this post

The Yellow-billed Cuckoo has become endangered in the Southwestern United States. It still has a large world-wide population of about 9 million.

In layman terms, it is hard to classify. It looks similar to doves, except it is seldom on the ground like a dove. It is more technically related to Roadrunners, but acts nothing like a roadrunner.

The American Birding Association here in Arizona does field annual field counts on the Yellow-billed Cuckoo because of its declining population.

It is a summer migrant, seldom reported before May or after September. Some good places to look are along the Santa Cruz River near Tubac and Tumacacori, along the San Pedro River near Hereford,  Pena Blanca Lake near the US/Mexico boarder, Arivaca Cienegas, Patagonia Creek, and Empire Gulch. As a general rule, in wet, riparian areas south of Tucson not far from the border. 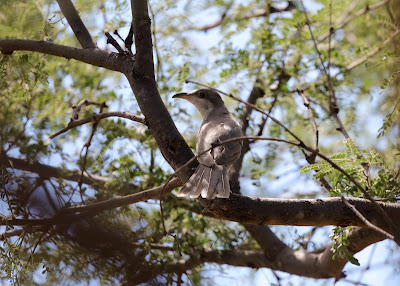 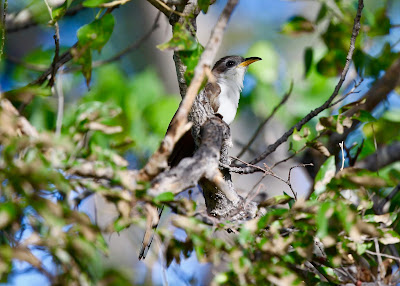 Posted by Dennis and Christine Widman at 5:55 AM No comments: Links to this post


Once difficult to find, Wild Turkeys have become common throughout the United States. This increasing population has found its way into suburban neighborhoods -- even here at The Azure Gate Bed and Breakfast.

Most of the Madrean Sky Island mountains (Catalinas, Santa Ritas, Huachucas, Chiricahuas) have abundant populations, where they can be more easily found.

As a side note, Benjamin Franklin wanted the symbol of America to be the Wild Turkey, not the Bald Eagle. Ultimately, the decision went to the (much smarter) Bald Eagle. That decision has lead to the use of the word "turkey" as a derogatory term meaning "losers" or ......

The Wild Turkey does remain the symbol of Thanksgiving though.

Here are some photos:

Posted by Dennis and Christine Widman at 4:27 AM No comments: Links to this post

On to a rare bird in Arizona, the Helmeted Guineafowl. It is native to Africa, but has been introduced into farms in Europe, Brazil, Australia, and the US.

Here is an interesting summary of the Helmeted Guineafowl's behavior (from Wikipedia):

This is a gregarious species, forming flocks outside the breeding season typically of about 25 birds that also roost communally. Guineafowl are particularly well-suited to consuming massive quantities of ticks, which might otherwise spread lyme disease. These birds are terrestrial, and prone to run rather than fly when alarmed. Like most gallinaceous birds, they have a short-lived explosive flight and rely on gliding to cover extended distances. Helmeted guineafowl can walk 10 km and more in a day, and are great runners. They make loud harsh calls when disturbed. Their diet consists of a variety of animal and plant food; seeds, fruits, greens, snails, spiders, worms and insects, frogs, lizards, small snakes and small mammals. Guineafowl are equipped with strong claws and scratch in loose soil for food much like domestic chickens, although they seldom uproot growing plants in so doing. As with all of the Numididae, they have no spurs. They may live for up to 12 years in the wild.

Males often show aggression towards each other, and will partake in aggressive fighting which may leave other males bloodied and otherwise injured. They will attempt to make themselves look more fearsome by raising their wings upwards from their sides and bristling their feathers across the length of the body, and they may also rush towards their opponent with a gaping beak. The nest is a well-hidden, generally unlined scrape and a clutch is normally some 6 to 12 eggs which the female incubates for 26 to 28 days. Nests containing larger numbers of eggs are generally believed to be the result of more than one hen using the nest; eggs are large and an incubating bird could not realistically cover significantly more than a normal clutch.
Domestic birds at least, are notable for producing very thick-shelled eggs that are reduced to fragments as the young birds (known as keets among bird breeders) hatch, rather than leaving two large sections and small chips where the keet has removed the end of the egg. It has been noted that domesticated guineafowl hens are not the best of mothers, and will often abandon their nests. The keets are cryptically coloured and rapid wing growth enables them to flutter onto low branches barely a week after hatching. 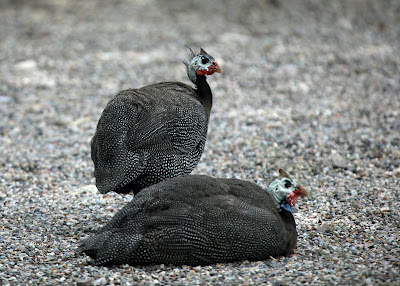 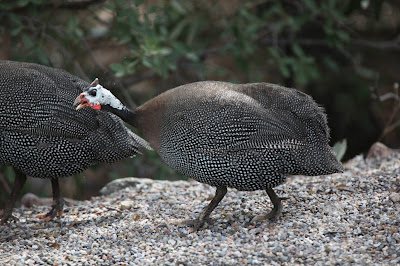 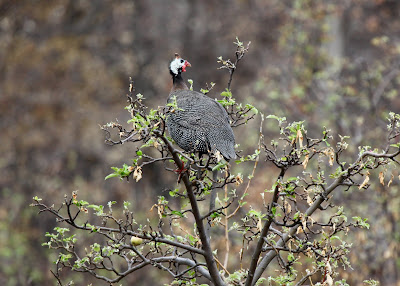 Posted by Dennis and Christine Widman at 9:17 AM No comments: Links to this post

The Greater Roadrunner is seen on a regular basis here at The Azure Gate. Always interesting to watch as it searches for lizards or other food.

Here are a few of my favorite Roadrunner photos: 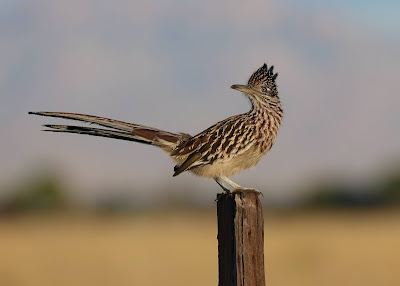 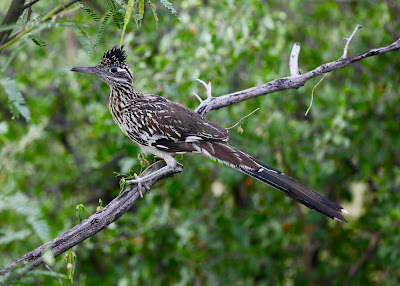 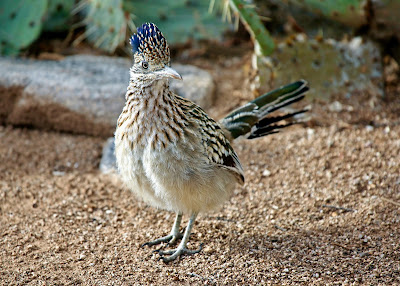 Posted by Dennis and Christine Widman at 9:05 AM No comments: Links to this post