On a Hot Summer Day in Tucson

First, just an interesting note. This morning I looked to see who was visiting our blog today: US and Canada of course; but also Brazil, Australia, Philippines, Pakistan, Russia, Czechia, Germany, France, UK, and Ireland -- and it's not even 7:00 am yet.

It's been a very busy year here at The Azure Gate. We're now in our summer months and yet business is still high. During the summer we get more guests from around the world. Last week we had someone from Taiwan (as I mentioned earlier), this week a couple from Qatar, our next arriving guests are from Switzerland; early next month a couple from Germany, then two weeks later returning guests from England.

Yet, life goes on here at The Azure Gate. Yesterday morning around 5:30 I walked out our bathroom door to swim and there at my feet was a beautiful Desert Kingsnake. I didn't have my camera with me, so here is an old photo to give you a picture of one:

After my swim I looked around for him but didn't see him. Then after getting dressed and on my way over to the office I saw what I thought was him crossing the driveway. As I got closer I realized in was a different snake -- a Sonoran Gopher Snake. I grabbed my camera but couldn't get a good photo before he hid in Christmas and Prickly Pear Cactus. Here is a previous photo to show what he looks like:

As I returned to the office with my camera, I noticed a beautiful Broad Billed Hummingbird sitting in the big Palo Verde Tree outside the office. So I did get that photo:

Thinking this was a pretty good start to the day I left my camera out where I could get at it quickly if I needed. During the next hour or so I got the following photos:

Not bad for a day where the temperature reached 120 degrees. And I didn't have to go up Mount Lemmon (where it is 30 degrees cooler) to get any of these photos.

Now, an update. That was yesterday. After I wrote this post this morning I made breakfast for Christine and me. Just as we sat down outside to eat our resident Cooper's Hawk came in and sat at one of our bird baths. He was there for about 30 minutes; first resting, then bathing, then resting again. This is a fairly common occurrence which fortunately guests often get to see. In fact it happens frequently enough that I no longer rush to get my camera. I just sit quietly and watch so as not to disturb him.

We do love the wildlife here. (As do our guests from the US and from around the world).
Posted by Dennis and Christine Widman at 6:58 AM No comments: Links to this post

A Wild Day at The Azure Gate

We have a Wildlife Photographer here from Taiwan (our first guests from Taiwan. It marks the 30th country we have had stay with us).

He got up early to go looking for birds to photograph. He returned just in time to see a large male Javelina rolling around in the mud:

Then around 6:00 pm, while sitting in the office, our little Bobcat came around. First, she peaked in the door to see what we were doing, then -- as she has before -- jumped up on the wall by the office, walked along the wall, then jumped up on the balcony outside Christine's studio. And there she laid down, cleaned herself, and took a nap. She was there for well over an hour:


We also have a very nice mother and daughter from Oregon staying with us. They got to see and photograph the Bobcat.


And our guest from Taiwan was able to get photos of the Bobcat and the Javelina.


So it was a "Wild Day" at The Azure Gate. Our guest from Taiwan must think it happens daily in America.
Posted by Dennis and Christine Widman at 6:31 AM No comments: Links to this post

Today at The Azure Gate


We have had several nesting Anna's Hummingbirds this year, so there are several immature birds "humming" around. Here's a nice close up of a young male Anna's:


And a nice close up of a male Cardinal:

Tried to beat the heat and got over to Sweetwater Wetlands before 6:00 am. Nothing too unusual, although there was a Tropical Kingbird there (along with some Western Kingbirds).

The Tropical Kingbird is one of those rare birds to the United States; the extreme Southeast portion of Arizona the only place in the US. What's unusual is that they are an easier find because they come in larger numbers - like the dozen or so at Santa Cruz Flats the other day.

Here are a few photos from Sweetwater, starting with the Tropical Kingbird:


Posted by Dennis and Christine Widman at 4:01 PM No comments: Links to this post

If someone were to ask me I'd say Santa Cruz Flats is a winter birding site. And certainly when you think of Raptors (including all five Falcons) and the multitude of shorebirds or threatened Mountain Plovers it is one of the very best winter birding spots.

But, I had to go to Phoenix so I though I'd drive through Santa Cruz Flats and see if there was anything interesting.

I could count the Raptors on one hand. And no Shorebirds or Plovers. But that's not to say it wasn't interesting. The big surprise of the day were a dozen or more Tropical Kingbirds:


But there were other finds as well:


I got two other photos but at the time didn't realize that I somehow accidentally hit the wrong "focus" button and ended up with what would have been great photos. Here there are anyway:

Posted by Dennis and Christine Widman at 2:39 PM No comments: Links to this post

Christine and I headed up to Incinerator Ridge (Mount Lemmon) on Thursday.  It was a beautiful early morning walk with lots of serenading birds the entire time.

There is usually at least one Abert's Squirrel begging for a photo: 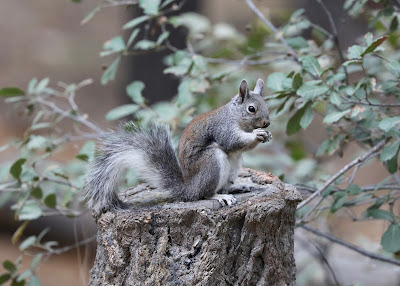 And, of course, Incinerator Ridge is the most reliable place in the United States to find the Red Faced Warbler: 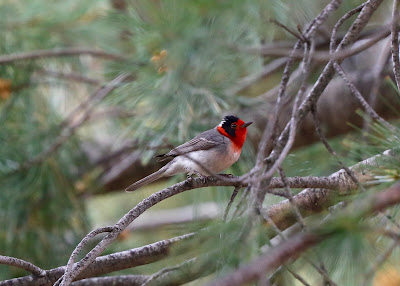 A pair of Stellar Jays were showing off their beauty, here's one of them: 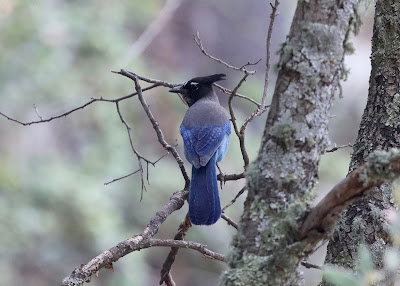 And at the top in the brush was a male Virginia's Warbler. The first photo is diagnostic even though you can only see the underside -- but you can clearly see the yellow breast and undertail coverts with light gray belly, which distinguishes them from all other warblers: 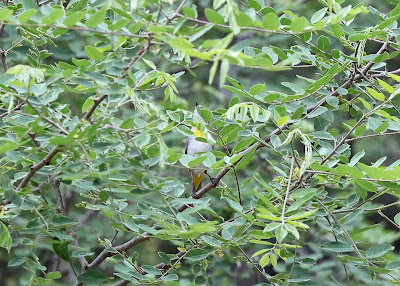 Here a little bit better photo. Although with this photo you can't be sure it is a male, nor is it absolutely clear that it is not a female Nashville Warbler. I guess that's why I like the photo above in conjunction with this one: 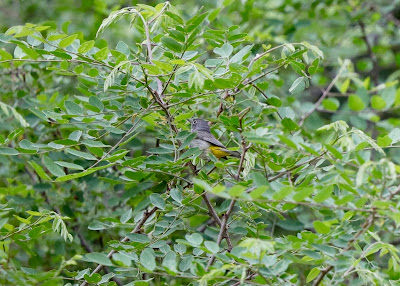 Posted by Dennis and Christine Widman at 7:06 AM No comments: Links to this post

Yesterday, while sitting in the office a young Bobcat came up to the front door and looked in. We looked at each other for a few moments, after which he jumped up on a wall walked along the wall then jumped up on Christine's studio balcony, laid down, cleaned himself, then took a nap. 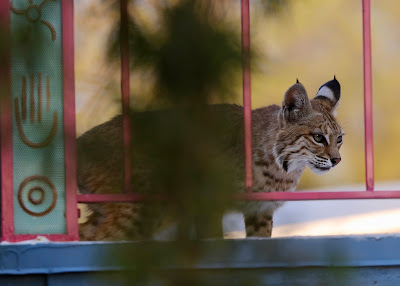 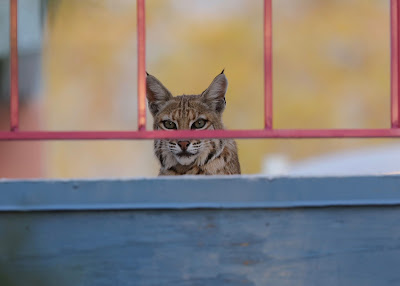 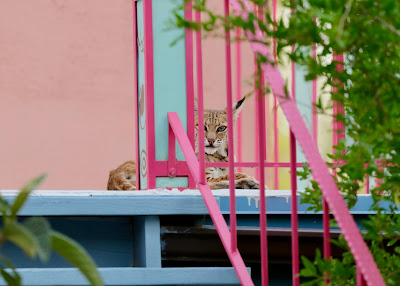 Wildlife comes to the Azure Gate and feels right at home!

Posted by Dennis and Christine Widman at 12:33 PM No comments: Links to this post


A quick trip around Sweetwater Wetlands yielded the typical birds, yet I did come away with a particularly nice photo of a Common Gallinule I thought I'd share:

And best to last, we were serenaded by Elegant Trogon's the entire time we were there; finding three at various times and spots. Here are a couple of those photos:

Posted by Dennis and Christine Widman at 10:12 AM No comments: Links to this post