The second Black Bear I came across in the Chiricahuas on Tuesday was standing beneath a tree. I don't think he saw me at first. He climbed up the tree and started eating the berries. I came much closer and watched him (from a distance of about 20 feet). After about ten minutes a large truck came streaking by and scared the bear out of the tree. I could see him further into the woods but he decided to cross Cave Creek and up the other side. I followed down to the creek where I got a nice photo of one of his foot prints.


Posted by Dennis and Christine Widman at 7:22 PM No comments:

Black Bears in the Chiricahuas

The Cave Creek area of the Chiricahua Mountains is one of the most bio diverse in the US. World renown for its birding, it also has a wide variety of mammals. The fire took its toll though on the birding. South Fork Cave Creek trail, one of the premier spots in the US was closed. The 1.5 mile road to the trailhead, while closed to autos, was open for foot traffic. I did that the first day before and then the second day after the "flood." (I will show you some "flood" photos in an upcoming post). Although there was an Elegant Trogon the first day, it was much too far away for a photo. The few birds that I did see that day were gone the next. However, just as in the Huachuca "Monument" fire, it brought the larger mammals down into the riparian areas where there was more access. In the three days at Cave Creek, I found five black bears.
I should start by saying that there were very few birders/tourists around. All the campsites were closed. Most of the people there were either at the Southwest Research Center (university students), rangers, or road/fire crews working to remove debris and assess damage. I did run into one small birding group the first day as I hiked up South Fork Road. The main road (Forest Road #42) was open from the little town of Portal for about 15 miles through Cave Creek and up the mountain at which point it was closed due to fire damage. With much of the surrounding area closed, all I could do was focus on what I could find from the road. As I was returning back down the mountain and into Cave Creek there was a Black Bear standing along side the road. (first photo) We stared at each other for a couple of minutes before he ran halfway up the hillside. (second photo) After he realized I was not there to harm him, he came back down and started eating the leaves off of the small saplings along the side of the road. I stayed with him taking photos for about 30 minutes. During that time no other car or people came by. Finally, I said "good-bye" and left him there to himself. Here are a couple of photos.

Posted by Dennis and Christine Widman at 9:38 AM No comments:

Just back from three days in the Chiricahuas. WOW!! There is so much to talk about. The fire, the flood, and the wildlife. I am going to start with a fun little wildlife story today:
I was driving along Forest Road 42 and saw what first looked like a Jackrabbit in the middle of the road. As I got closer I realized that it was too small to be a Jackrabbit. As I got still closer I realized in was a Deer! Now, I know you ask, are you serious? A deer smaller than a Jackrabbit? No, this is not one of those Texas jokes. It was a Coues (pronounced cows) White Tailed Deer. The Coues White Tails are smaller than the White Tailed Deers you see all over the US. The Coues (named after Elliott Coues, 1842-1899) are only found in southern Arizona. An adult White Tail Buck will weigh 200 pounds. An adult Coues White Tail Buck will weigh only 80-90 pounds. Fawns weigh 4 to 6 pounds when they are born. The deer on the road was a fawn. Here is the first photo:


Remember you can click on a photo to see it enlarged.

Posted by Dennis and Christine Widman at 12:02 PM No comments:

After my bear encounter I headed south and through Nogales and back up to Madera Canyon stopping along the way at Rio Rico Ponds. Rio Rico Ponds, which is about ten miles from the Mexican Border,  is just a low level grassy field that collects a few inches of water. As such it is teeming with food for waders. Every once in a while a rarity such as the Roseate Spoonbill or Tricolored Heron may show up. A more common visitor is the Black Bellied Whistling Duck. While I say more common, realize that this area and the very southern tip of south Texas are the only spots in the US that host this gooselike duck. The Black-bellied Whistling-duck is quite unique among ducks because they are monogamous. Pairs often stay together for many years, a trait more often associated with geese and swans.

Posted by Dennis and Christine Widman at 7:36 AM No comments:

Allen's Hummingbird is a normal summer resident along the California Coast and winter resident of South California. However, it occasionally makes its way into Southern Arizona. Rare enough that it gets listed in the Audubon's Rare Bird Alert. Such was the case on Thursday in Ash Canyon. Allen's are very similar to the Rufous Hummingbird that migrates through Arizona and the southwest to its summer spots in the northwest. We get a few Rufous that seem to hangout in Arizona throughout the summer as well. In any case  the difference is the the Allen's male has a very green back, while the Rufous is orange on the back (with a few scattered spangles of green). The females are for all practical purposes identical. The female I saw Thursday I can only suggest was an Allen's because there was a male Allen's and no male Rufous. This was the 15th species of Hummingbird I have photographed here in Arizona.

Posted by Dennis and Christine Widman at 8:26 PM No comments:

Coronado National Monument, Ash Canyon, Stump Canyon, Miller Canyon, and Carr Canyon (the entire south end of the Huachuca Mountains) remains closed due to the fire and subsequent flooding. Many of the roads and trails are washed out or covered with tons of rock and debris. So, needing someplace to go, I thought Ramsey Canyon (the canyon just north of Carr Canyon) which reopened last week, might become the "recovery" area for bears (and other large mammals displaced by the fire). I was determined to hike as far up Ramsey Canyon (Hamburg Trail) as I needed to find a Bear. I didn't get far. Not 100 yards up the trail from the visitor's center was a Cinnamon Black Bear in a tree. It was probably a two or three year old, maybe 200-250 pounds. What a delight!!! He performed all sorts of acrobatic maneuvers. He was fairly high up in the tree and continued to climb as he ate. As I have seen them before the tree sways while the Bear climbs, but once they get to a feeding point they "settle in," shifting their weight however necessary to stabilize themselves. They eat only moving their arms until all leaves are stripped clean. Then it is a couple feet higher up the tree, swaying, stabilizing, and then eating. I also knew that eventually they would come down the tree. So, I hung out there watching and taking a photo now and then until he came down -- about an hour and a half later. Here then is the series: 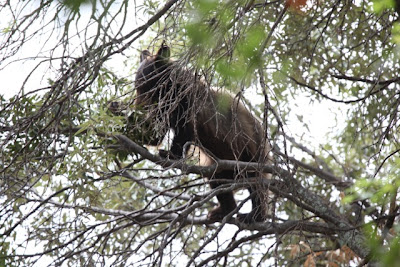 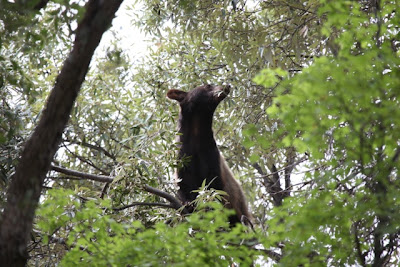 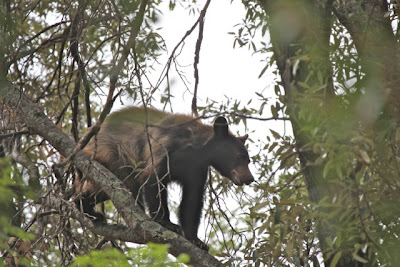 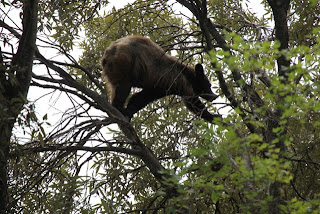 Posted by Dennis and Christine Widman at 4:57 PM No comments:

While on the subject of Hummingbirds I thought I would share with you photos of the rarer hummers of the US. The Calliope is found in very small numbers in the far western states and Arizona. The Berylline, White Eared, Lucifer, Violet Crowned, Plain Capped Starthroat, and Blue Throated are only found in the extreme southern Mountain Ranges of Southeast Arizona (Chiricahuas, Huachucas, and Santa Ritas).


Posted by Dennis and Christine Widman at 8:10 AM No comments:

Although I went to Madera Canyon specifically to photograph the Berylline Hummingbird, there were  other hummers present as well. The Rufous is always fun to watch and to photograph. They have such wonderful color and character. Every once in a while, one would fly right up in my face, as in the last photo. Maybe he wanted a closer look at me; maybe he was catching bugs that were buzzing around me.  Don't know, but I got some nice photos:


Posted by Dennis and Christine Widman at 4:54 PM No comments:

I spent most of my time in Madera Canyon at Kubo Cabins. During that time the following hummingbirds were observed: Anna's, Berylline, Black Chinned, Broad Billed, Broad Tailed, Magnificent, Rufous, and Violet Crowned. That's eight different species in one sitting.

Posted by Dennis and Christine Widman at 7:18 AM No comments:

Our good friend Susie (from California) sent me a "Rare Bird Alert" on Wednesday that a Berylline Hummingbird was seen in Madera Canyon at Kubo Cabins. Kubo Cabins is another of the premier southwest Arizona bird feeding stations.  Madera Canyon has three wonderful sites: Santa Rita Lodge, Chuparosa Inn, and Kubo Cabins. While Beatty's Orchard in Miller Canyon is the best of the Huachuca Mountain sites (followed closely by Ash Canyon, then Ramsey Canyon) Kubo Cabins is the top site in the Santa Rita Mountains. The Innkeeper at Kubo is very nice and welcomes you to sit on her porch to get a better view. There is a "Bird Feeding Donation" bucket which is appropriate for anyone using the site. Now, back to the story. I went to Madera Canyon on Thursday and was there for 3 1/2 hours (7:00 am - 10:00 am) without spotting the Berylline. (Thursday's post was of some of the other birds photographed that day). Yesterday, I received a second email from Susie saying the Berylline was spotted again -- but after 10:30 am. So, I headed out once again to find -- and photograph the Berylline, arriving around 11:30 am. I was there for nearly three hours and saw a Berylline three times. The first time he flew directly to the opposite side of a feeder never hovering about the feeder, just drinking and flying off. So, no photo. The second and third time I was in a better position and got a few photos (not great, but acceptable).

Posted by Dennis and Christine Widman at 1:42 PM No comments:

Madera Canyon is open again. Still some restrictions on campfires, but trails are open. So off I went and found some nice photos:


Posted by Dennis and Christine Widman at 2:24 PM No comments:

The San Pedro River shoots through Southern Arizona into Mexico between the Dragoon Mountains and the Huachuca Mountains. So, while fires were going on there and mountain ranges were closed the San Pedro River brought additional birders AND BIRDS. I came across several male Summer Tanagers, a couple of which were kind enough to pose for me. As is usually the case, there were many Vermillion Flycatchers, both male and female. I got a nice photo of a female.  It was hot and muggy (and fortunately I remembered to bring some bug spray along.)
Posted by Dennis and Christine Widman at 5:31 PM No comments: