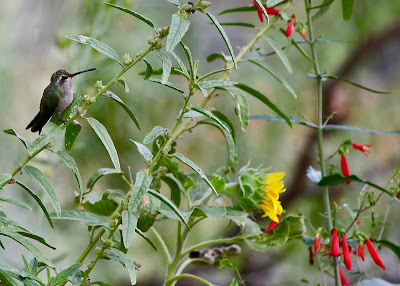 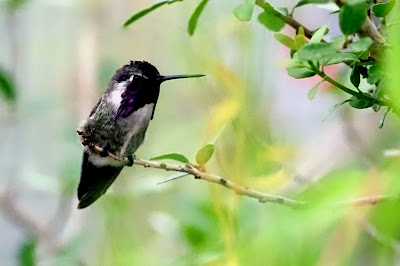 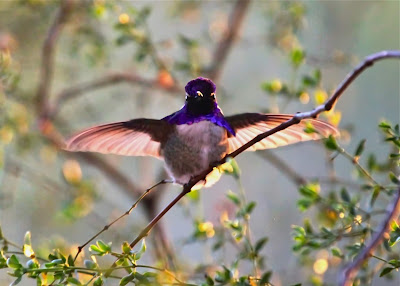 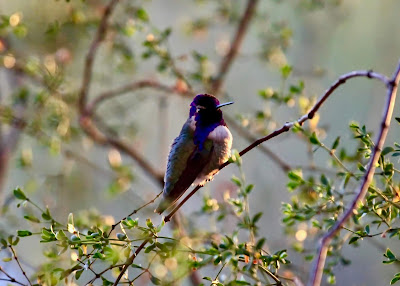 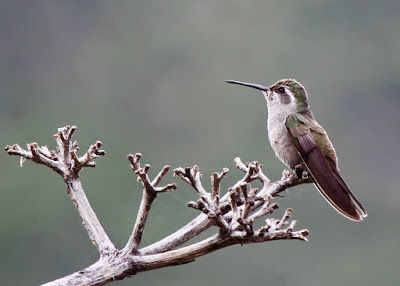 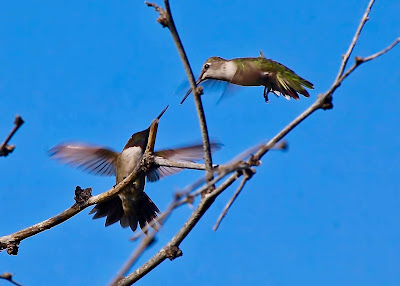 Size: The Costa's is a small hummingbird of about 3.5 inches with a short straight bill.

Identifying Characteristics: For the male it is a long, flared purple gorget. The female is much like the Black-chinned female except that there appears to be a dark gray "smear-like" patch in back of the eye. (very clear in the next to last photo). The female also appears duller; i.e. the back and rump are not as dark green as the Black-chinned. It can even appear grayish. The Costa's is a little "plumpier" than the black chinned as well.

Seasons: year round with highest concentrations from February through June.

Where To Find: Although not abundant, it is here at The Azure Gate year round. So this is one of the most reliable places to find Costa's. WOW Arizona is another location to try. Like the Calliope, though, they do not travel in large numbers. So finding them is more difficult.

Comment: The Costa's, Broad-billed, and the Anna's are the three most frequently found hummingbirds here at The Azure Gate. Costa's and Anna's breed here during the Spring. They typically nest on outer branches of our Palo Verde trees. Their nests are a work of both art and engineering.  They are delicately woven and yet strong enough so that during high winds, the nest sways with the branches as one.  The nests are about two inches high, with an inside diameter of only an inch at most. Usually, two eggs - although at least one year there were three. The Costa's prefers red flowers. In California, that is the Red Penstemon. Here at The Azure Gate that means Salvia. They also feed on insects that they can catch around those flowers.
Posted by Dennis and Christine Widman at 3:40 AM