Intermediate Mammals, not a very scientific name, but I mean bigger that a rabbit, but smaller than a deer. Well, close enough. First up: The American Marten. The photo of the American Marten was taken in Canada, which is only fair since most of the Canada Geese I photograph, I have taken in America. Of course, it is an American Marten but not a Canadian Goose -- it is a Canada Goose. However, I think I am really digressing and probably loosing people by the word. The Marten lives in mature mixed or coniferous forests from the Sierra Nevada's, Colorado Rockies, Northcentral and Northeaster US up through Canada to Alaska.  Trapping and destruction of forest habitat have reduced its numbers, but it is still much more abundant than the larger fisher.  Like cats, its claws are semi-retractable to aid in climbing trees. It also has very large foot pads in relation to body weight allowing it to walk on hard snow. This provides the Marten with a distinct advantage in areas that receive heavy snows. I saw one in Northern Colorado while I was photographing a Bull Moose. The Marten was behind me an in the trees. The snow was about 18 inches deep which made it very difficult for me to get close enough, quickly enough to get the best photo. The Marten is omnivorous, preferring to catch and eat small mammals, especially squirrels as seen in the photo below. But it will also eat fish, frogs, insects, carrion, and fruit and other vegetation when available. It is most active at night, early morning, and late afternoon. It is usually solitary outside of the mating season. Males defend a territory of one to three square miles, and can be very aggressive toward other males. Mating occurs during the summer, but implantation of the fertilized egg is delayed. Up to five "kits" are born the following spring in a den in a hollow tree or rock cavity. The fur of the American Marten is shiny and luxuriant, resembling that of the closely related sable or mink. At the turn of the twentieth century, the American Marten population was depleted due to the fur trade. Numerous protection measures and reintroduction efforts have allowed the population to increase, but deforestation is still reducing its habitat. 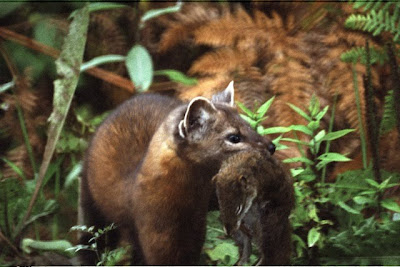 American Marten
photo taken in British Columbia
The Coatimundi or Coati is one of my favorite animals to photograph in Arizona. Actually, it is a White Nosed Coati here in Arizona (as you can see from the photo). They are found in Southeastern Arizona and New Mexico south to Ecuador. They are omnivores, preferring small vertebrates, fruit, carrion, insects, and eggs. They can climb trees easily, where the tail is used for balance, but they are most often on the ground foraging. I have seen as many as fifteen in a single tree. Their predators include bobcats, mountain lions, raptors, and (in Central America) boas. They readily adapt to human presence; like Raccoons, they will raid campsites and trash receptacles. They can be domesticated easily. They are primarily diurnal, retiring during the night to a specific tree and descending at dawn to begin their daily search for food. However, their habits are adjustable, and in areas where they are hunted by humans for food, or where they raid human settlements for their own food, they become more nocturnal. Adult males are solitary, but females and sexually immature males form social groups (troops) of up to 40. They use many vocal signals to communicate with one another, and also spend time grooming themselves and each other with their teeth and claws. 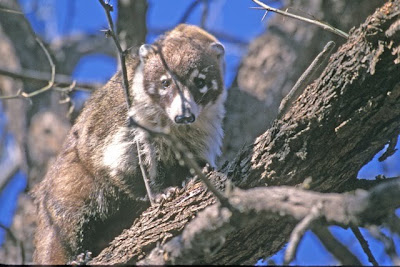 Coatimundi or Coati
photo taken in the Galiuro Mountains of Arizona
The Common Porcupine is next. Although the name "Common" doesn't seem very appropriate. Out of the countless hours I have spent in the wilderness I have come across maybe five. Their range is from the Arctic Tundra south through mixed and coniferous forests, through the deserts and shrublands to northern Mexico. The Porcupine makes its den in a hole in a tree or in a rocky area. Their upper parts are covered with thousands of sharp, barbed hollow spines or quills, which are used for defense. Porcupines do not throw their quills, but the quills detach easily and the barbs make them difficult to remove once lodged in an attacker. The quills are normally flattened against the body unless the animal is disturbed. The porcupine also swings its quilled tail towards a perceived threat. The porcupine is the only native North American mammal with antibiotics in its skin. Those antibiotics prevent infection when a porcupine falls out of a tree and is stuck with its own quills upon hitting the ground. Porcupines fall out of trees fairly often because they are highly tempted by the tender buds and twigs at the ends of the branches. Porcupines and Skunks are the only North American mammals that are black and white, because they are the only mammals that benefit from letting other animals know where and who they are in the dark of the night. Porcupines are mainly active at night; on summer days, they often rest in trees. During the summer, they eat twigs, roots, stems, berries and other vegetation. In the winter, they mainly eat conifer needles and tree bark. They do not hibernate but sleep a lot and stay close to their dens in winter. Natural predators include fishers, wolverines, coyotes, and mountain lions.  The porcupine, however, is much less an object of predation than other small mammals are. They move slowly and death is more often by vehicles than predators. 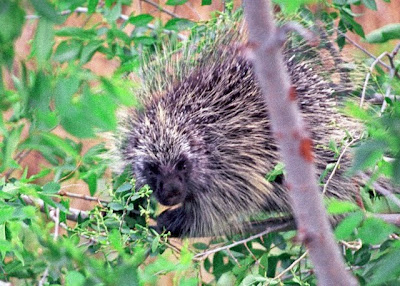