Still a few more raptors. This time the Harrier Hawk. The first photo is one I took about 15 years ago. It was my first "Award Winning Photo." Christine and I were driving in Northeastern Oregon on our way to Joseph, Oregon. This was truly "god's country" with very small towns (no traffic lights) and mostly farm land. When I took this photo I didn't think it would turn out. But, as I have said, sometimes after you develop the film you are pleasantly surprised (and occasionally disappointed). 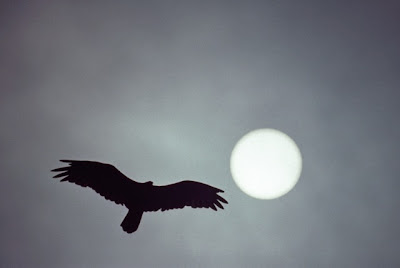 The Harrier Hawk is unique in that the sexes have different colorations. The male is grey with a clean white underside. The female is brown with a barred underside. The following photo clearly shows the male coloration pattern: 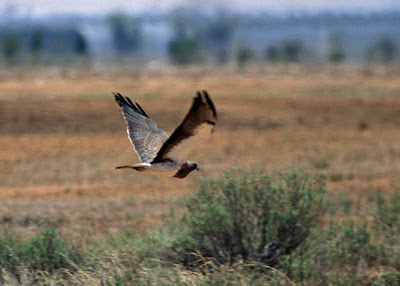 The Harrier Hawk is usually seen coursing low over fields looking for small mammals (or birds). It then suddenly pounces on its prey and eats on the spot. It does not (often) take its food into a tree like the Cooper's or Sharp Shinned Hawks. That may be because there usually aren't trees around. Although, as you can see from the next photo that isn't always the case. He wasn't in the tree long as he returned to coursing. 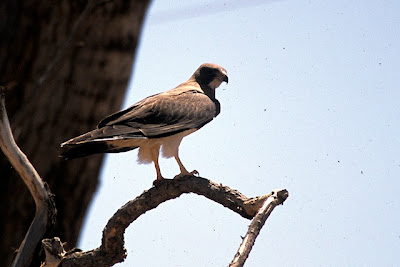 Posted by Dennis and Christine Widman at 7:44 AM