We have reached our "off-season" at The Azure Gate. So, I had a couple of days without having to make breakfast for guests. A couple of those mornings I went over to Agua Caliente (about four miles from us). On one of the mornings I photographed what looked like a MacGillivray's Warbler except that there weren't any white eye arcs. So, I hit the books and found that it looked much like a Mourning Warbler. Yet, there have only been two reported sightings of Mourning Warblers in Arizona and the last was in 1998 along the San Pedro River.

I've never thought I had much chance winning the lottery, so it seemed unlikely that it was a Mourning Warbler.  I sent the photos to Andrew Core at the Audubon Rare Alert site who sent the photos to Mark Stevenson and a few others. The conclusion is an "unusual" MacGillivray's Warbler -- which I agree with.

You'll note in the photos the lack of pronounced white eye arcs (usually the first thing you see when you see a normal MacGillivray's): 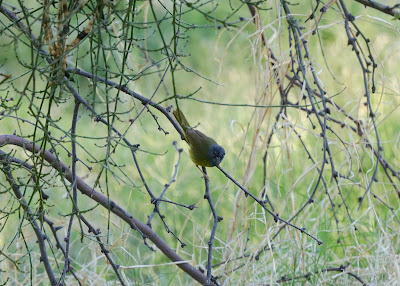 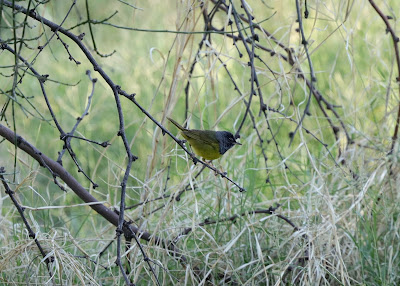 Posted by Dennis and Christine Widman at 5:55 AM