Continuing to share my warbler photos along with information about each species, from my latest book: "Warblers of Arizona, A Guide to Finding and Photographing Warblers in Southern Arizona." 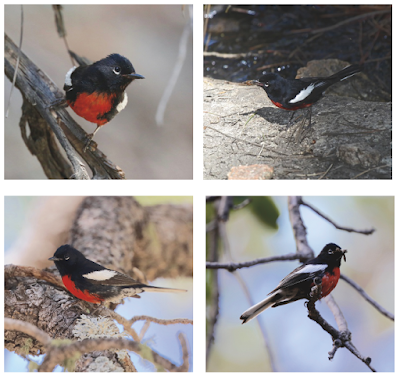 Description: black head, nape, back, face, flanks and tail; broad white wing patch; white undereye arc; bright red breast and belly; long white tail; gray vent and black undertail coverts
​
Male/Female: identifcal
​
Range: primarily Southern Arizona and New Mexico with some south to Nicaragua
​
Migration: summers (breeding) in Arizona and New Mexico and winters in Mexico
​
Season for Arizona: year round though higher populations from April through September
​
Habitat: oak and pine forests in mountain canyons, from elevation 4900 feet to 8200 feet
​
Community Behavior: solitary, Painted Redstart families, or mixed warbler flocks
​
Feeding Behavior: forages by hopping around at all levels from ground to treetop gleaning from leaves, trunks, branches, and ground debris; sometimes will sally out to snatch flies in midair; flashes its wings and outer tail feathers when foraging; moves up and down older trees similar to creepers
​
Diet: mostly insects including: ants, beetles, spiders, flies, caterpillars; will take suet, peanut butter, and sugar water from feeders
​
Nesting Behavior: some males and more than one mate; nests on the ground hidden among rock, roots, or grass on steep slope; 3-4 whitish eggs with brown speckles; incubation is 14 days; young leave nest after 9-13 days; often 2 broods per year
​
Where to Find in Southern Arizona: any of the Sky Mountain Ranges in Arizona; particularly Mount Lemmon in the Catalinas, Huachuca Canyon in the Huachucas, and Madera Canyon in the Santa Ritas; very conspicuous and easy to find when present; both male and female flash their wings and tail as they look for food
​
Comments: one of the most beautiful of all Warblers; first described by John Swainson in 1829
Posted by Dennis and Christine Widman at 8:25 AM