Continuing to share my warbler photos along with information about each species, from my latest book: "Warblers of Arizona, A Guide to Finding and Photographing Warblers in Southern Arizona." 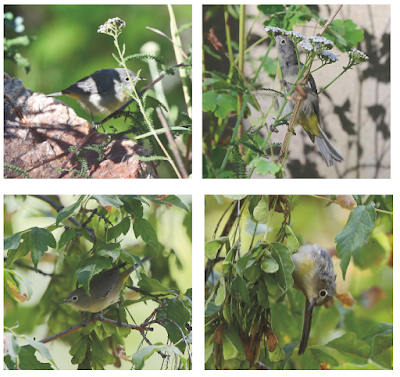 Description: grayish back and head; white eyering; no wing bars; variable yellow on breast; brighter yellow rump and undertail coverts; long thin gray tail; chestnut crown similar to Lucy’s and Nashville but not often seen
​
Male/Female: less or duller yellow on throat and breast
​
Range: Nevada, Utah, and Colorado south throughout Western Mexico
​
Migration: summer and breeds in Nevada, Utah, Colorado, Arizona, and New Mexico; winters Pacific Coast of Mexico
​
Season for Arizona: April through August
​
Habitat: dense oak and pinyon forests, brushy streamside hills at elevations between 4,500 and 9,000 feet
​
Community Behavior: solitary or with other Virginia’s Warblers
​
Feeding Behavior: gleans insects among foliage and twigs; sometimes on the ground; sometimes probing buds and flowers; usually within 15 feet of the ground
​
Diet: diet is unknown, but presumably includes insects
​
Nesting Behavior: on ground hidden amongst dead leaves and tufts of grass usually beneath shrubs or young trees; nests are cup shaped and constructed of moss, grass, bark, and roots; 3-5 white eggs with brown spots; male and female both feed the young; incubation and nestling periods are unknown
​
Where to Find in Southern Arizona: Mount Lemmon in the Catalinas, Huachuca Canyon in the Huachucas, Madera Canyon in the Santa Ritas, and San Pedro River; check ABA Birding News for this species
​
Comments: much about the Virginia’s Warbler is unknown; in part due to its relatively limited range and population; and part due to it's preference for dense brush
Posted by Dennis and Christine Widman at 6:52 AM