Taxonomic authorities have made some changes in the name of this hummingbird over the past few years. Once referred to as the Rivoli's Hummingbird, then changed to the more commonly used Magnificent Hummingbird. It was then determined that the Magnificent had two subspecies, a northern one of Mexico and Arizona and a larger one of Costa Rica and Panama. The northern one is  now referred to as  Rivoli's and the southern one as Talamanca.


There is an interesting article on the coloration of bird feathers in the Cornell Lab Bird Academy.

There are three types of Pigmentation: Carotenoids, Melanins, and Porphyrins. These are substances in birds (plants, animals) that are in fact a specific color. A Cardinal for example has red pigmentation.

Structural Colorations are caused by light as it is refracted by the proteins in the feathers. The two types are Iridescent Feathers and Non-Iridescent Feathers. The most obvious example of Iridescent Feathers is the gorget of hummingbirds. And the most obvious example in hummingbirds on our property is Anna's Hummingbird whereby the crown and gorget can look "black" until the sunlight hits them and the red becomes striking. This is obviously very different than a cardinal which looks red regardless of how the sunlight hits its feathers. 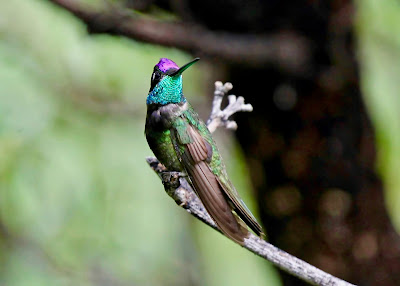 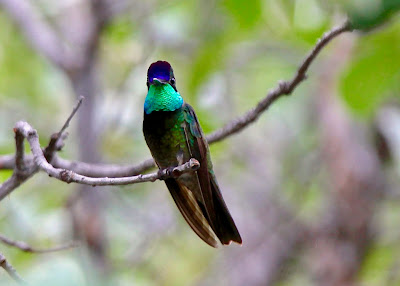 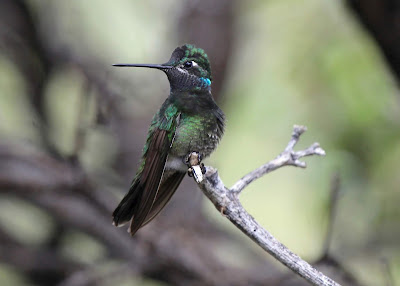 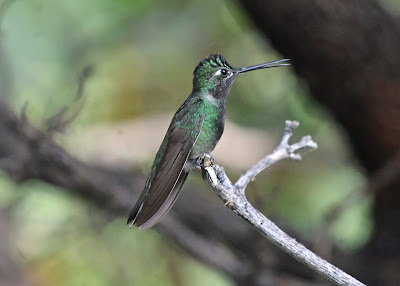 Identifying Characteristics: The male is dark green with iridescent purple forehead and crown, and more of a lighter metallic green gorget. Yet, in a different light, those bright colors disappear.  The female is more dark gray on it's breast, belly, and flanks.

Habitat: Riparian woodland, pine-oak forests, and mixed conifer forests, typically at a higher elevation, but can be found in wooded foothills near water.

Where To Find: It is a sure find in Miller Canyon, though not abundant.  They are often  seen at Ash Canyon, Ramsey Canyon, Madera Canyon, and Portal feeders, but always seen them at Miller. They are not common to the lower elevations such as The Azure Gate, though we did have one show up late one afternoon.

Comments: These large hummers are fun to watch. They are constantly chasing each other around. They tend to drink from the feeders furthest away, but with patience can be photographed on a tree branch much closer. Usually, there are a half dozen or more pairs hanging around Miller Canyon.
Posted by Dennis and Christine Widman at 4:06 AM