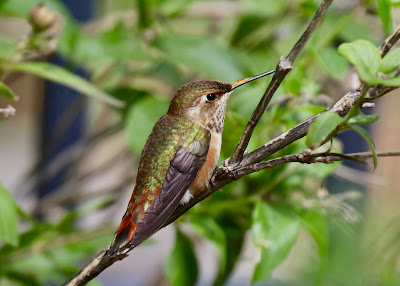 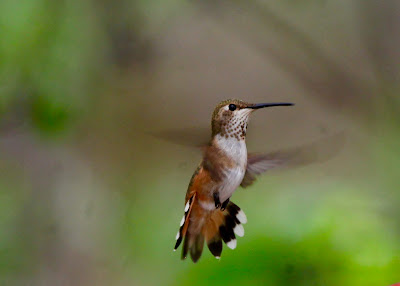 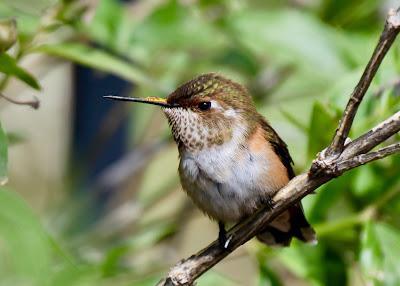 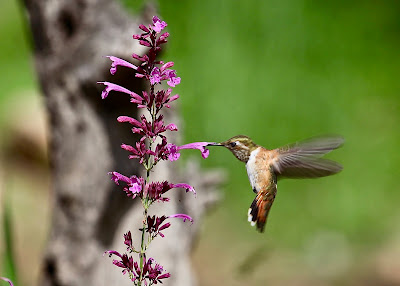 Size: The Rufous is a small hummingbird about 3 1/2 inches with a small and straight bill.

Identifying Characteristics: It's orange. Okay, that is a bit of an exaggeration. The male has an orange crown, back and belly, with a bright orange gorget as seen in the first photo.  In the second photo the male's gorget actually looks purple. And at still other times it will appear black. These "changes" are the result of "structural colorations" of the feathers caused by light as it is refracted by the proteins in the iridescent feathers.  The female is more buff color but has a distinctive small orange central patch as seen in the third photo. The female also has a green back as seen in the fourth photo.

Range: Southeastern Alaska to Oregon, migrating through the other western states to Mexico for the winter.

Seasons: Since Rufous migrates through Arizona, it is typically found in March and April, and then again August and September.

Comments: These little guys (and gals) are ferocious. They will choose a feeder and "claim" it, chasing off any would be intruder even though satiated. Males will open their gorgets as a sign of strength or power, females will wave their tail at opponents. Being orange -- rufous in color makes them stand out, and are really quite beautiful to see and watch.
Posted by Dennis and Christine Widman at 5:53 AM