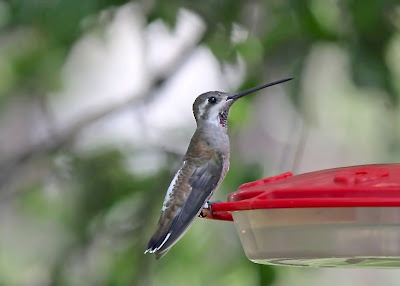 Size: The Plain-capped Starthroat is a large hummingbird of about 5 inches, with the longest bill of any hummingbird in the US (up to 37 mm - 1.5 inches).

Identifying Characteristics: What sets it apart, other than its size is lightning bolt stripes on the side of the head and very pale, almost white breast and belly. The male has a red throat, the female has a purple central patch (as seen in the second photo). It is the only North American hummingbird with white on its back (see second photo above).

Habitat: Unlike the large Blue-throated and Magnificent it is found at lower elevations near century plants (as well as lower mountain elevations).

Where to Find: No location is a sure thing.  It has been seen at Paton's in Patagonia, Montosa and Madera Canyons in the Santa Rita's, Ash Canyon in the Huachucas, French Joe Canyon in the Whetstone Mountains, Agua Caliente, (about four miles from us), Sabino Canyon in the Catalina Mountains, and Portal in the Chiricahua's.

Comments: This is a very rare hummingbird to the US. (It's not listed in many of the US Field Guides). When it is spotted usually the "birding community" becomes aware and people head out with binoculars and cameras to that spot. You'll need to keep checking the Audubon's Rare Bird Alert and Birding News to know where to look -- provided one has been found. They are not abundant, and may only come to a feeder once every couple of hours.
Posted by Dennis and Christine Widman at 9:54 AM