The National Bison Range National Wildlife Refuge is a marvelous area in Western Montana often overlooked -- even unknown -- because the major attraction in Western Montana is Glacier National Park. The refuge is about 25,000 acres of grasslands and mountains. Because hunting is not allowed, animals are not only plentiful but can live a long time and get quite large. In the first photo look at the size of this buck. It's still a little earlier in the year (probably May) so his antlers aren't fully grown yet, but look at his girth. This is probably a 300-400 pound deer. 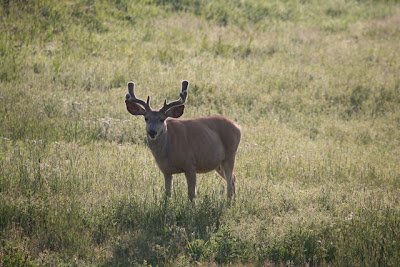 The next photo taken during the early summer shows that the bucks at NBRNWF will sometimes herd together. Because they are protected they don't  always run away, although they clearly knew I was there and kept an eye on me. 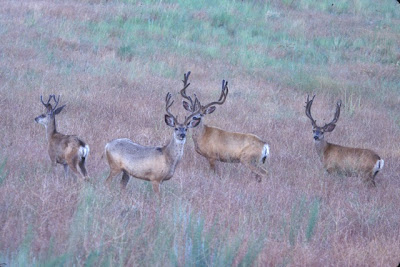 Posted by Dennis and Christine Widman at 5:33 AM