Finding large bucks in hunting areas is a challenge any time of the year but especially during hunting season. That is one of the reasons why I like the US National Wildlife Refuge System. This next photo was taken in Cabeza Prieta National Wildlife Refuge in Southwestern Arizona. The refuge was established in 1939 (largely through the efforts of the Boys Scouts of America) to protect Desert Bighorn Sheep (now the symbol of the Boy Scouts). Cabeza Prieta is 860,000 acres which is 30 times larger than the National Bison Range and larger than the State of Rhode Island. It is the third largest Refuge in the lower 48 states. There is wonderful history there. The Refuge contains the "El Camino Del Diablo" Spanish Colonial Trail that was used by the Spanish, Mexicans, and Native Americans as far back as 1,000 years. It is a very (!) hostile climate. Temperatures above 120 degrees are common during the summer. To get on the Refuge you must obtain a permit and "call-in" your entry and exit dates/times. To get the permit you need to watch a 25 minute video on the hazards of the refuge, and then sign a two-page document verifying that you watched the video and that you take full responsibility for your own safety. They suggest a gallon of water per day per person and TWO (!) spare tires. I can testify to the need for at least one spare tire. But, back to Mule Deer.  I like this photo first, simply because I found this large buck on one of the few Refuges that allow "legal" hunting. And second, because it is sort of a hidden picture. Photographing animals in Yellowstone, for example, is quite different. In Yellowstone large animals (bear, moose, elk, deer) see people constantly and only look at them occasionally (probably for their amusement). In wilderness areas, especially where hunting is allowed, animals are extremely cautious, will often take cover, and rarely take their eyes off of you: 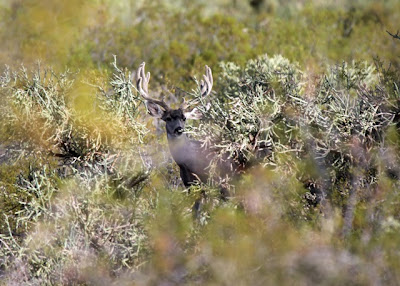 Posted by Dennis and Christine Widman at 11:36 AM