This should be the last of the Moose stories for now, unless a Moose walks through our backyard among the cactus. It was 2000, and I took daughter Ashley on a photo trip exploring British Columbia and Alberta. I was taking her up Maligne Road. We were watching the temperature gage on our new truck as it was approaching "zero" and wondering how it would register a minus number. (no big surprise it simply read: -1).  Just as we got to Maligne Lake we saw a Moose cow with her calf. I thought it would be fun to get a photo of Ashley with the Moose. So, I kept asking her to "back up just a little". Each time I asked she moved about a half an inch, so I had to ask many times. Then it was "one, two, three, snap", (notice Ashley's Antlers which she did on the count of three): 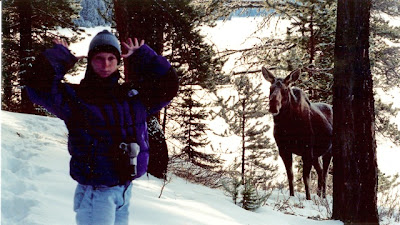 The next photo is a close up of the same Moose: 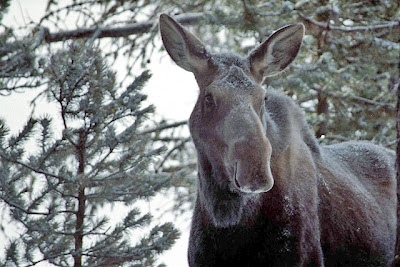 The last photo is the mother and her calf a little later as they began walking away. 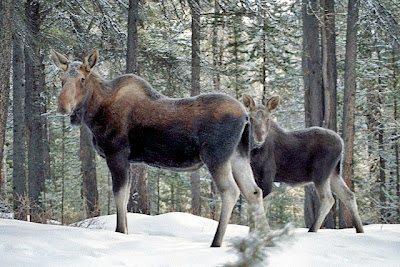 Now, the rest of the story goes this way: Ashley is a sweetheart. She'll do anything I say. Well, she used to. Now she's -- I'll just say a bit older, and probably wiser. In her younger days, she made many trips with me first fly fishing and then photographing wildlife. On this one occasion, though, as soon a she got back home she went running to her mother saying, "Daddy made me stand real close to a Moose and scared me!!!!" She's still precious.
Posted by Dennis and Christine Widman at 5:09 AM